It's been a little over a year since local progressive media standard-bearer the San Francisco Bay Guardian ceased print operations in a cost-cutting measure by their relatively new owners, Canada-based Black Press and what ultimately became the subsidiary known as the San Francisco Media Co. By that time, longtime editor-in-chief Tim Redmond had already left the company to launch his own site, 48 Hills, where he continues to report and comment on SF politics, but the remaining Guardian staff pledged at the time to revive the brand "in some form" in the future.

An important step in that process was just completed in October 2015 when former publisher Marke Bieschke and Redmond negotiated the transfer of the paper's 48 years of print and digital assets to a new non-profit organization, the San Francisco Center for Newspaper Preservation, and now they have launched a crowdfunding campaign both to preserve that archive for the future and relaunch several of the Guardian's popular features, including their annual "Best of the Bay" issue. As they write, they're seeking $120,000 in order to rescue the existing archive of print and memorabilia; deliver a full set of papers going back 48 years to an accredited archival library, likely at UC Berkeley, for preservation; digitize that entire archive; redesign and relaunch the SFBG.com site; relaunch Guardian features like their election endorsements and the Best of the Bay beginning in 2016; and compensate "the legal and managerial team that helped win back the rights to the Guardian from its former owners."

SFist asked Bieschke about how this process has gone so far, what the vision for the future of the Guardian brand is without a weekly newspaper, how it will co-exist with 48 Hills, and what the next steps are.

SFist: It took a while to negotiate the release of the Guardian’s digital archives from Black Press. What was the sticking point there?

It was a true labor of love, and also pretty complex in terms of logistics and legalities  and maybe a few precious egos. But almost exactly one year from when the Guardian was shut down, we signed the papers taking it back. We're still figuring a lot of stuff out, obviously. Part of the process was just the natural time it takes when you're working with a (phenomenal) pro-bono team with absolutely no money  that was on our side of things. I think on the Black Press side, it was just a matter of coming to terms with the fact that they didn't really want the brand, or couldn't monetize it in a way that made sense for them. That said, once things started to move, the Black Press and SF Media Co. people have actually been incredibly generous and cooperative. It just took a while to dot all the t's and cross all the i's.

Did you end up with hundreds of people asking where this year’s election endorsements would be?

Yes, it was really overwhelming  there was a flood of desperate-sounding emails, frantically waving handkerchiefs, offers of first-borns, etc. Some people hadn't even realized we had stopped printing! I guess that's a testament to the power of the brand? We did manage to get the "Guardian Clean Slate Endorsements" out a couple weeks before the election, and just kept our fingers crossed that our rickety old site would stay up. Incredibly, it did, and the Clean Slate was viewed about 30,000 times, which was almost one-fourth of the electorate.

The Guardian’s longtime rival SF Weekly continues on in both print and web forms under the same Black Press ownership. Do you have any words of advice for them?

I salute the editorial team (trio?) at SF Weekly for hanging in there and continuing to work its collective ass off, despite an ever-shifting economic and managerial atmosphere. Hang in there, kitties!

Going forward, there’s a non-profit, and you plan to both preserve the print and digital archive, and continue a few special publications a year?

Yes, that's the intent. As mentioned before, we're still piecing things together, and it will all depend on how much we raise via our fundraiser. Our pipe dream is to get a full, 48-year set of newspapers into an accredited archival library, and preserve the other papers in an appropriate storage facility while we digitize each issue and upload them in flip-though form to an online archive. On top of that, we want to relaunch the Guardian website in a more stable, redesigned format, and restart things like Best of the Bay, the Clean Slate Endorsements, and our annual GOLDIES arts awards. Maybe we'll even reboot our fabulously useful Nude Beaches Guide. Climate change demands it!

When would the next "Best of the Bay" be published?

If all goes well with the fundraiser, we're hoping to start the voting very early in the new year. Categories may or may not include: Best Place to Hide From the Superbowl, Best Local Landmark That Hasn't Been Monetized Into A Luxury Spa, and Best App Not Appended With the Suffix "-Ly," "-R," or "-Ify." Thinking about adding Best Local Troll, too, since there's so much competition. Fishchum, Mr. Eric Sir  start rallying!

Where does the physical archive of papers live right now?

The newspaper archive is in a temporary storage unit in the Bayview. It need to be sorted, but at least it's not in a dumpster, which very well might have happened. Which would have been a tragedy, because the archives are a 50-year time capsule of local history  everything from early ads for the Fillmore to an official Draft Dodgers' Guide; essays, articles, and opinion pieces by Allen Ginsberg, Armistead Maupin, Alice Waters, Harvey Milk, and tons more famous local writers; and interviews with basically everyone under the sun in terms of arts, culture, and politics. And you wouldn't believe the '80s fashion spreads, '70s events calendars, and '90s record reviews!

What will be the ongoing relationship between 48 Hills and SFBG.com?

We're still fitting everything together, but 48 Hills will remain a separate site as an established brand with fresh daily content and more than 35,000 visitors a week and growing. We envision SFBG.com to be the home of the archives, political endorsements and opinion pieces, and bigger signature features, but it, too, will remain dynamic in some form or other.

Legally speaking, can you still do the election endorsements as a non-profit? Or will the Guardian’s new publications exist separately?

The Guardian brand is part of the San Francisco Center for Newspaper Preservation, a 501(c)4 nonprofit we set up, which is able to make political endorsements as well as accept political advertising.

How many people do you envision will be involved going forward?

I would love to see us grow to support an entire editorial, sales, and production staff. But right now we're working with a core team that includes former editor Tim Redmond, a part-time sales person, a web developer, and myself, plus a dedicated freelance support crew. And of course Guardian founder, Bruce B. Brugmann is advising and assisting.

Lastly, it looks like the crowdfunding campaign got a boost via a $40,000 matching grant. Congrats! Can you say who offered that?

Thank you! We're really stoked about that for a couple reasons  first because the matching grant really gives us a boost, of course. But also because our anonymous donor, who's not affiliated with any political groups, was formerly involved with the Guardian and really appreciates what we're doing, trying to preserve this independent, unique voice.

Today, on Giving Tuesday, both 48 Hills and the San Francisco Center For Newspaper Preservation are seeking your donations, so, be generous. 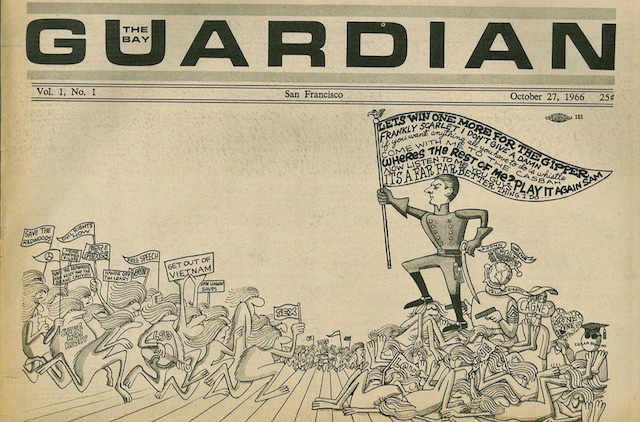 With Aaron Peskin's November election to the District 3 seat, the Board of Supervisors is set to make a shift to the left. However, what day he officially begins his job is ultimately

One prominent symbol of the power of Oakland, a pioneering city from the first days of the container-shipping era in the early '70s, will reach new heights and greater capacity next spring: Four