In addition to testing six new reaction buttons that will let you at least show your empathy for a friend who's in the hospital without using a thumbs-up button, Facebook is finally rolling out an opt-out option for their Memories/On This Day thing, allowing you to select certain dates and certain people you'd prefer not to be reminded of by some thoughtless algorithm. As The Verge reports, this is in order to avoid cases of "inadvertent algorithmic cruelty," as the phenomenon was coined late last year by a blogger whose Year in Review popped up with his recently dead daughter front and center.

Having learned nothing from that debacle, the Facebook team launched their On This Day nostalgia feature in March, in which a line of code randomly forces you to look at photos of anything from a day at the beach four years ago to a relative on their deathbed or a friend who committed suicide. It's like some bizarro, Black Mirror-like phenomenon created by thoughtless twenty-two-year-olds to torture the rest of us who've actually had lives already.

Now, thankfully, they've given us opt-out options (seen below, though the ability to completely opt out has been there, just not very obviously), allowing us to choose specific dates we don't want commemorated year after year  a daunting memory task in itself if you've been a big Facebook sharer, and thereby a big documenter of memories both bad and good  and people we don't ever want to be reminded of again, like that ex you're still hung up on and about whom you don't need any extra prompting when it comes to remembering them. 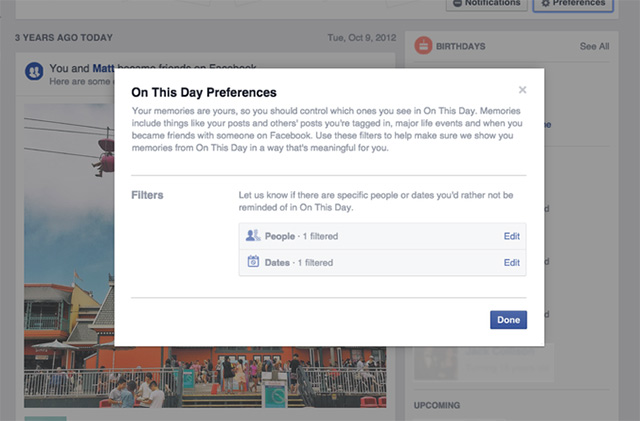 As Facebook said in a statement today, "We know that people share a range of meaningful moments on Facebook... good, bad, and everything in between. So for the millions of people who use 'On This Day,' we've added these filters to give them more control over the memories they see."

Thank you, O Facebook Lords, for allowing me to filter the memories you force me to remember, rather than letting you do it for me. As Wired puts it, "There you go: A little eternal sunshine for your spot-filled mind."

Previously: 2014: The Year Facebook Started To Figure Out How It Hurts People

When Jack Dorsey isn't somewhat inelegantly downsizing Twitter, he's busy filing for an initial public offering on behalf of the OTHER company at which he's CEO: Square! Get ready to trade on that

Everyone wants to eat like Anthony Bourdain, the enfant terrible of the food world turned its leading man. Juhu Beach Club is taking that quite literally, and in anticipation of an upcoming Anthony

—
Facebook Will Now Stop Showing You Photos Of Your Exes And Dead Pets, If You Tell It Not To
Share this