The bell has tolled for Herbivore Divisadero, whose best years, most agree, were well behind it. And in 16 of those years, there were definitely some better ones — or so I've heard.

Nonetheless, yesterday, Hoodline had word that the veggie spot's time had come. The place looks to be closed for good — not just some kind of temporary thing like the Health Department mandated closure this spring.

We'll spare you the details on that, and won't be shedding any tears over the news of the closure. Besides, there are still several Herbivore locations for fans, including one on Valencia and one in Berkeley.

It sounds like Yelpers won't be losing any sleep, either: In fact, the loathing with which many wrote about this particular place is kind of shocking. So here are a few nails in the coffin: The best (worst?) 1-star reviews of Herbivore at 531 Divisadero. 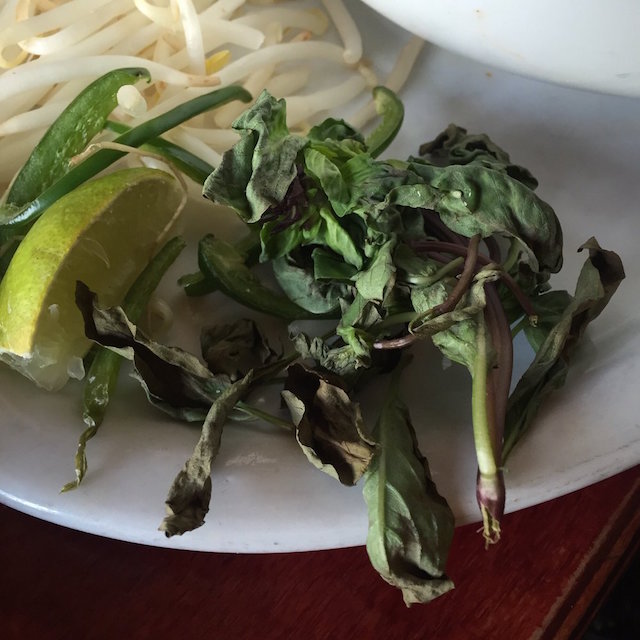 Would you like some dead basil with your noodle soup? Very bad. — Alinta J.

Being a vegan restaurant is no excuse for sucking at life, Herbivore! Get your sh*t together! — Rachel B.,

I wouldn't serve this stuff to a rabbit... I think they had a carnivore cooking the food to make people wonder why they ever became a vegetarian. —Sal B.

If my first vegan meal were at Herbivore, I would leave feeling such great empathy for the culinary horrors vegans must endure. — Tim B.

Just do not. Go to a regular restaurant that has ONE vegan dish instead. — Colleen C.

I wish there was a no star the service her is beyond terrible. I will never bring anyone here again. — Mandy W.

In 44 years of living, this was the most disappointing restaurant experience I can remember. — David W.

If you can't get kale right in a vegan restaurant, there's no return. Will never be coming back. — Elise S.

To describe the food ; Imagine a late, LATE night, you've been out drinking. You've been out drinking SO LATE that nothing is open and you have to make your own food in your own kitchen. Remember, you've been drinking... A LOT. You have a TJ's pad thai in a box, but you have no noodles, so you decide to use some star noodles instead and of course this will need sriracha.........point is, imagine the gross, wacky food you made in college after LONG nights and that is what our dishes were reminiscent of. —Jes V.

They have no fucking idea what they are doing. — Ghosty V.

Food was bad, service was poor, and it made my ass explode. — William W.

I hate this place. They suck! — Melissa E.

Herbivore has to be the worst restaurant in San Francisco. — Pavan Y.

I'm not going back. I imagine they once had something good going, but it seems those days are over. —Jason A.

House Democratic Leader and former Speaker Nancy Pelosi sat down, perhaps reluctantly, for an ice cream with Larry Wilmore at New York's Big Gay Ice Cream for The Nightly Show, and the results

The New York Times Magazine this week delves deep into a profile of Raymond "Shrimp Boy" Chow which is also, in turn, a profile of his flamboyant, anti-government defense attorney J. Tony Serra