"We're asked all the time if we have some kind of inside scoop as to what openers work best," said Karen Fein, VP of Marketing for the dating app Hinge, after SFist asked basically just that question.

But, since they were fielding it so often — and since, Fein explains, the Hinge team can't read everyone's messages — the company decided to do an experiment. What lines worked, where, and when, based on variance in response rate?

Hinge, if you are blissfully unaware of dating in 2015, is an app similar to Tinder with an emphasis on shared Facebook connections. Tinder, of course, is similar to Grindr — at least in that it's a location based dating/hooking up/you decide people-meeting app.

They've all got something of a common ancestor in OKCupid, a website known for exploring its data and running experiments like this one from Hinge. Last year, Dataclysm by Christian Rudder, who sold OKCupid to Match.com in 2011, emerged as a bestseller for its insights into lots and lots of human behavior on the Internet.

Over at Hinge, which is currently available in just 34 cities, they brought together copywriters and data scientists to draft a list of 100 or more conversation starters Those were, According to Fein, — "basically meant to show an extensive variety of the things you might see. They made sure to include things that were long, short, had binary options, didn't, referenced pop culture."

"For 22 percent of users who were in this test group: They matched with someone new, and then they received a prompt with three of the over 100 openers to choose from to start their conversation. Those three were randomized to ensure that each had equal impressions so we could really understand, and see which received the highest response rate. Of course, they could load more options or ignore the prompt altogether."

From that data, Hinge learned that opening lines that were effective in Los Angeles (say, one's about the entertainment industry) weren't nearly as effective in San Francisco. They also learned that men and women respond differently based on the window in which they receive a message.

Have a look, and if they're both tasteful and universally applicable, share your best opening lines in the comments. 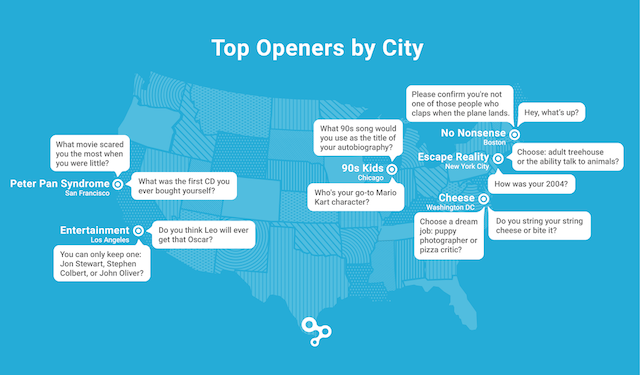 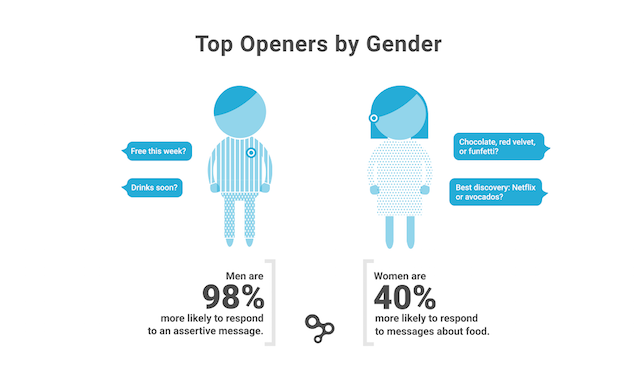 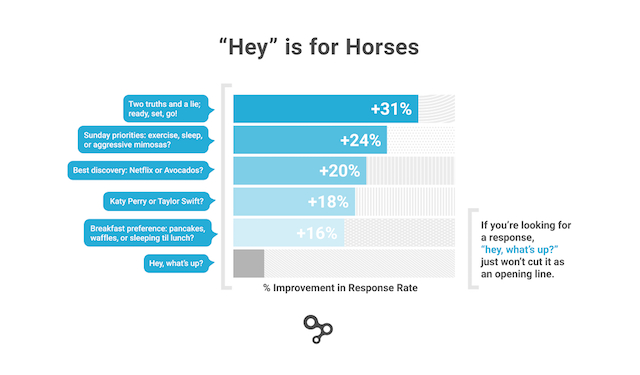 A few more insights from Hinge:

"What movie scared you the most when you were little" performs 98% better in SF than in other US cities.

"What was the first CD you ever bought yourself" performs 38% better in SF than in other US cities.

"You can only keep one: John Stewart, Stephen Colbert, or John Oliver" performs 54% worse in SF than it does in LA (where it's a top performer).

"Two truths and a lie; ready, set, go" performs 36% worse in SF than it does in other US cities (where its a top performer).

San Francisco is not Boston:

What movie scared you the most when you were little" performed 80% worse in Boston than in SF.

"What was the first CD you ever bought yourself" performed 70% worse in Boston than in SF.

Related: Cruising UberPool And Lyft Line For Dates Appears To Be Trending

In a slightly different tactic, the coalition of UCSF-connected enemies of the proposed Warriors Arena have just presented a letter to the mayor signed by 20 of the university's leading scientists and researchers

As some in the local gay community call it, Folsom Street Fair weekend is the "high holidays," whereas Pride weekend is just "the holidays." And the high holidays are upon us once more.