As we augured based on the schedule slash vibe of previous years, DeadMau5 is your Treasure Island Music Festival Saturday headliner with the National headlining on Sunday. The rest of the daily lineups, without specific times, have also been announced. And, in case you missed it, a reminder: Robyn & La Bagatelle Magique are being replaced by FKA Twigs. Robyn was having emotional difficulty performing songs written by a friend who passed away recently, and is bowing out of the appearance, and Twigs is on Saturday just before DeadMau5, it appears. Last, keep in mind the official list of nightly shows announced thus far, which include YACHT at the Independent and Atlas Sound at the Swedish American Hall.

Single-day general admission and VIP passes go on sale this Thursday, September 17 at 10:00 a.m. PT over at treasureislandfestival.com. Those are $95 and $179.50, respectively. Also, expect comedy this year in the festival's first such foray, with its own tent in a partnership with Funny or Die. 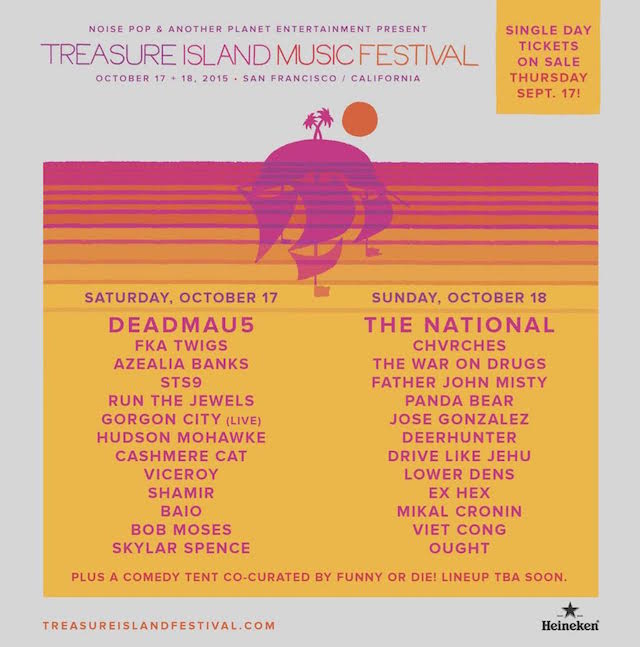 For years, as the popularity of Facebook has exploded as not only a space for sharing enviable photos of your beach vacation but also as a place to vent about current events, mourn

by Daisy Barringer Every year, a few weeks before the start of the NFL season, I start having anxiety dreams. The Niners kick off in ten minutes, but I’m an hour away