Created by Eduardo Aguilera in 2004 and meticulously maintained by Colleen Yerge, the Lands End Labyrinth, which SFist profiled in a list of seven just last month, has vanished. Though the stone pattern is a symbol of collective meditation and peace, that apparently wasn't enough to stop a band of vandals, the closest thing there could be to actual goblins, from trashing the thing sometime in the past week.

The news broke on Twitter and was reported by RichmondSFBlog, with others noting the mysterious disappearance — it was perhaps thrown into the waters below — on Reddit.

@richmondsfblog - Can you tell me what happened to the labyrinth? Went there yesterday and it was gone! #sad pic.twitter.com/ERAsbt8Vf8 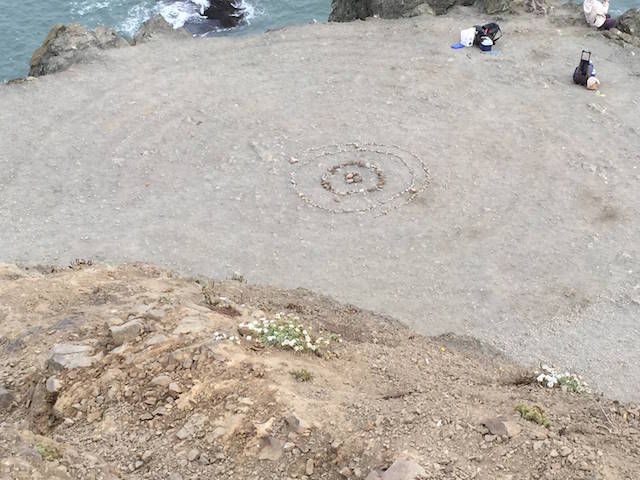 Vandalism has been a problem for the Lands End Labyrinth in the past, too. "I never know what I’m going to find," Yerge told the Chronicle of her caretaker-ship earlier this year, "This time someone turned it into a maze,” she said. “I don’t know why.”

This time, Yerge wrote in to RichmondSFBlog to register her disappointment. This was her statement.

The labyrinth is there as a sign of peace, love and enlightenment for all. And especially for those that are suffering so much. So even when it is destroyed after I put over 40 hours of carrying rocks and assembling the piece, I still have compassion for whoever did it. Eduardo Aguillera the original artist who built the labyrinth told me to not put my whole heart and love into it, because it will be destroyed. I appreciate those words and it is a good reminder I have continued to rebuild and I plan on rebuilding again but I am waiting to hear from the parks department. Last time I rebuilt was in April and only a handful of people came out to help, so I’m thrilled to see that there are more people that I can call upon when I do rebuild. I have received quite a few emails today from people who read your blog, and I will contact each one of them when I do rebuild. This little piece of land is so special and I appreciate if you would ask for others to wait to help me rebuild when the time is right. And to remind those to not get mad or angry at the people who vandalize itafter all, this little piece of land is bringing more and more community together with each time it does. It also is an incredibly great reminder to detach from our attachment to the space and reflect.

Previously: Get Lost In These Seven Amazing SF Labyrinths

Whoa. Forbes has not one but two pieces out today coming after the for-profit Academy of Art University and the multimillionaire Stephens family who have been running it for several generations. It's only

Sometimes you just need a part for your electric train set, or a skein of a specific brand of alpaca yarn, and you don't want to wait three days for Amazon. In this