Sometimes you just need a part for your electric train set, or a skein of a specific brand of alpaca yarn, and you don't want to wait three days for Amazon. In this age of increased internet shopping, when you can get basic goods delivered (for a fee) within minutes or hours, there should still be a place for the kind of niche retail stores where you can delve whole-hog into a hobby or obsession, spend more money than you ought, and get the immediate gratification of touching, examining, and walking out of the store with exactly what you needed. Thankfully SF is full of such stores, and below is just a sampling of highlights, courtesy of your SFist editors. (See also The 11 Best Candy and Chocolate Shops in the Bay Area.)

International Spy Shop
Whether you're a hobbyist who dorks out on gadgets you might find in Mission Impossible, or a legitimately paranoid person in need of a covert nanny cam or bug detector, this is your store. The place has been around for years and was recently featured on Storage Wars, and the inventory covers a broad range of stuff including pepper spray pens, infidelity detection kits, tiny microphones and long-range listening devices, and personal panic buttons. It's the ultimate supply shop for the neurotic!  Jay Barmann
555 Beach Street 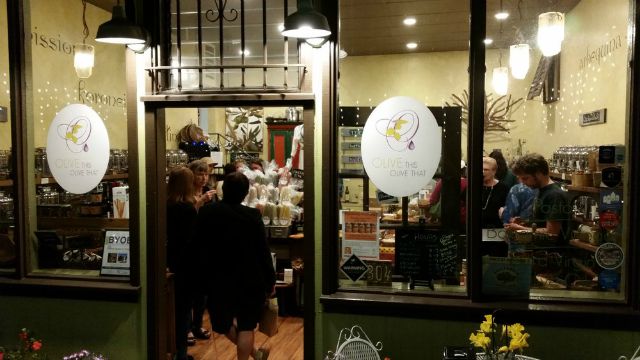 Olive This Olive That
As co-owner Jannell describes it, Olive This Olive That is a "boutique retailer and tasting bar" devoted to extra virgin olive oils from California and elsewhere. If, like me, you thought olive oil is mainly the stuff you use to cook when you're feeling over-buttered, she's happy to re-educate you with a long and detailed conversation on the benefits of and many culinary uses for olive oil. They also carry kitchen goods, artisan pasta, locally made sauces, hand-harvested sea salts, and body lotions, but it's their many oils that are the real star. While you can come in and taste from their two walls of oils any time, the last Thursday of every month is where it's at  that's when they host their regular "Bring Your Own Bread" tasting party (which is kind of a misnomer, as many snacks are provided). -- Eve Batey
304 Vicksburg Street between Church and Sanchez 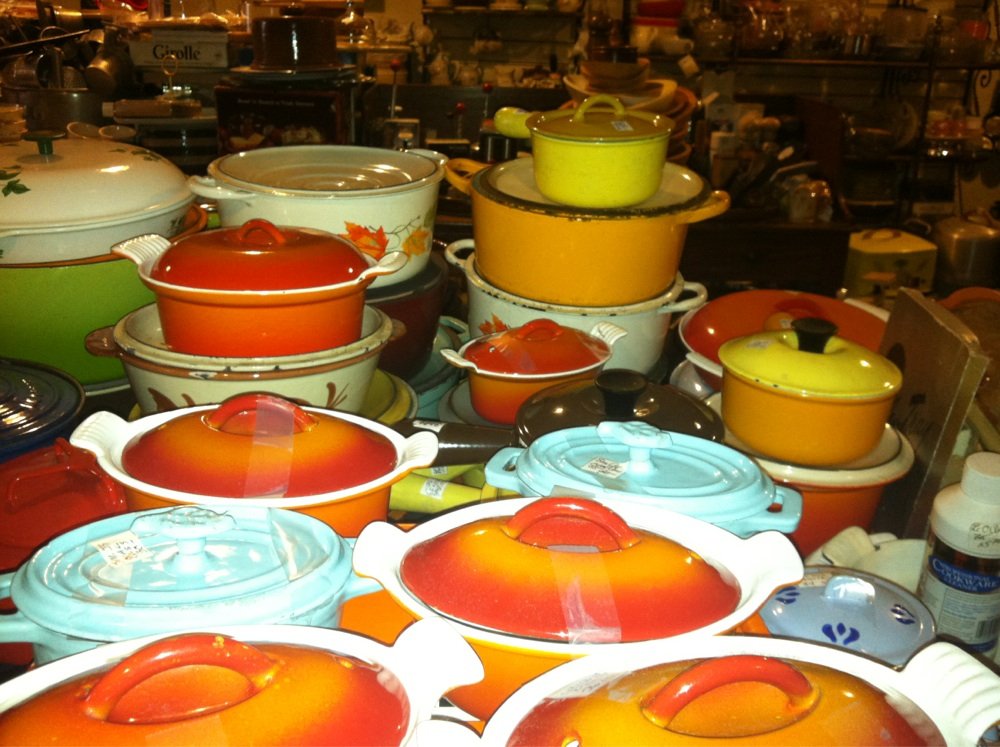 Cookin'
Judy Kaminsky, as the Chronicle reported in 2011, doesn't give a rat's ass about the negative Yelp reviews of her 1981-opened high-end used kitchen supply shop. A charming eccentric among a trove of hoarded treasures, Kaminsky can be seen picking over thrift stores and flea markets when she isn't off on an antique hunting trip to Paris. Formerly an academic, "Teaching freshman composition is disgusting," she said, "and people kept borrowing the old cooking stuff I had... so I figured I'd open Cookin'." Says Quince chef-owner Michael Tusk, "When I moved to San Francisco, I lived right next door and would stop in every day... And Judy... Well, Judy you warm up to. I warn my young chefs, though." Let that serve as your fair warning, too.— Caleb Pershan
339 Divisadero Street between Page and Oak Streets 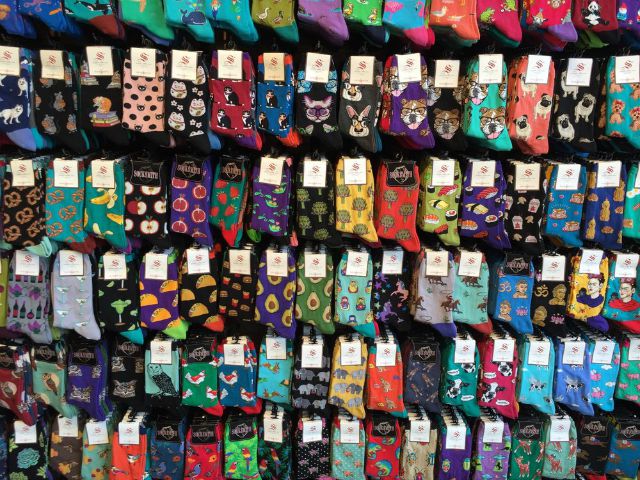 Just a few of the zillions of socks at The Sockshop. Photo: Mike B./Yelp

The Sockshop
Socks are typically an afterthought for most of us: a holiday gift, something you buy a bag of at Target, etc. But when you walk into the Sock Shop you feel obligated to up your game, as you're suddenly confronted with the widest selection of novelty, fashionable, witty, and classic socks you've ever seen. Independently owned and operated, the Sock Shop's owners got into the hosiery game 27 years ago with a tiny shop in Santa Cruz, and have since expanded into the Haight and Berkeley. Best of all, the staff is knowledgable, helpful, and pleasant (a rarity in the tourist-saturated Haight). -- Eve Batey
1742 Haight Street between Cole and Schrader 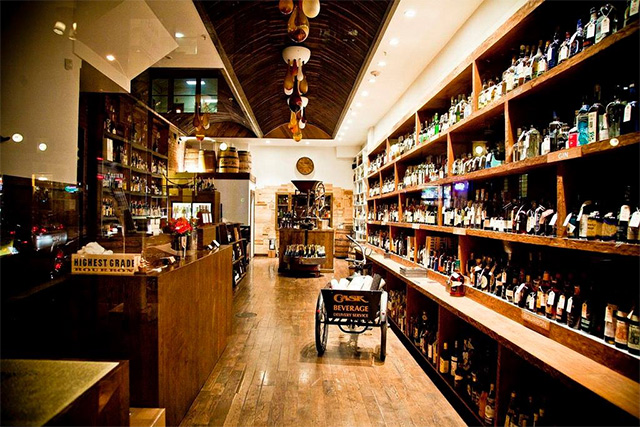 Cask
For a town as obsessed as San Francisco is with fancy cocktails, we are surprisingly light on fancy booze and barware emporiums. Sure you can get a lot of stuff at BevMo, and there are little neighborhood spots like Healthy Spirits, Bi-Rite, and Swirl, but for my money, if I've got some specific and hard-to-find spirit needs, I'm heading to Cask. They now have three locations, and in addition to outfitting your cocktail cart with the proper pitchers, strainers, and jiggers, you'll find a deep selection of whiskeys, gins, tequilas, bitters, and you name it to impress all your cocktail-nerd friends. Need Batavia arack, or Cardamaro? You'll find that there, and plenty more that they don't carry at BevMo.  Jay Barmann
17 3rd Street at Market; 101 Spear Street in Rincon Center; 3185 College Avenue, Berkeley 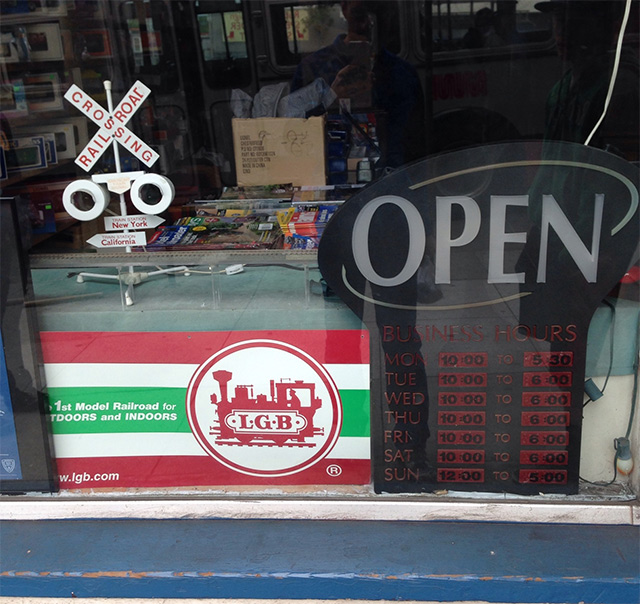 Chan's Trains & Hobbies
We're not exactly in a golden age for hobby shops, and Chan's is a bit of a relic that's still holding on in Russian Hill, selling Lionel Electric Trains and accoutrements, as well as Thomas & Friends products, and model car and plane sets. You have to get buzzed in the door, and it's hardly a well laid out retail experience, but true hobbyists won't care about any of that since the selection is pretty wide.  Jay Barmann
2450 Van Ness Avenue at Union 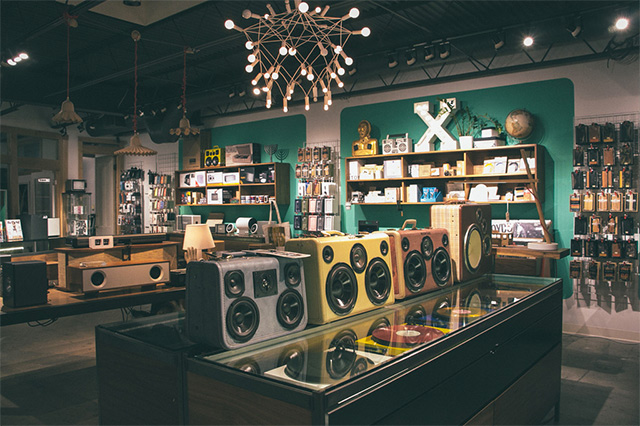 Dijital Fix
Founded in Brooklyn (of course) in 2006, Dijital Fix made its debut on the ever-hipsterfying Valencia strip in 2012. And lest you dismiss the place as just another store filled with random objets and turntables for hip kids with too much money to burn, the product array is actually a cleverly curated mix of art, gadgetry, audio equipment, and design-y doo-dads the likes of which made places like Fab.com big business in recent years. It is an emporium of curiosities and gifts for Millennials, no doubt, but where else are you going to find Polaroid film next to waterproof Bluetooth speakers next to $400 leather headphones and decks of playing cards made of balsa wood. For design geeks and audiophiles, the place is pretty hard to hate.  Jay Barmann
820 Valencia Street 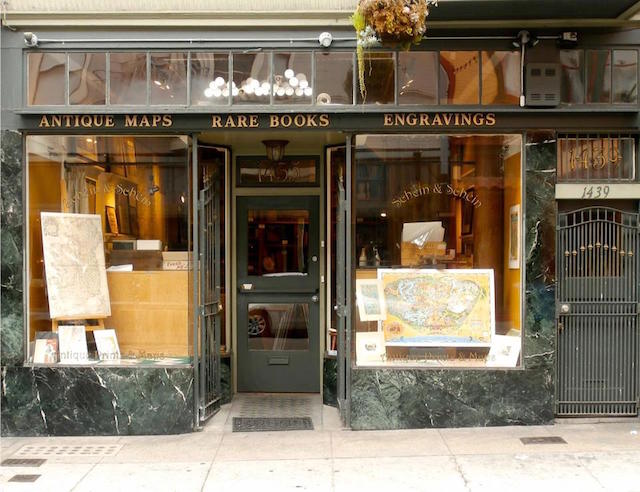 Schein & Schein
X marks the spot for cartography enthusiasts at this North Beach antique map emporium. Peruse thousands of them along with unique prints in this lovely, bookish shop where an adorable canine — Emma — holds court. Jimmie and Marti Schein specialize in San Francisco maps and wine country material from the 19th and 20th centuries, making it a perfect stop for those redecorating an SF pad or looking for a Frisco-focused gift. — Caleb Pershan
1435 Grant Avenue between Union and Green Streets 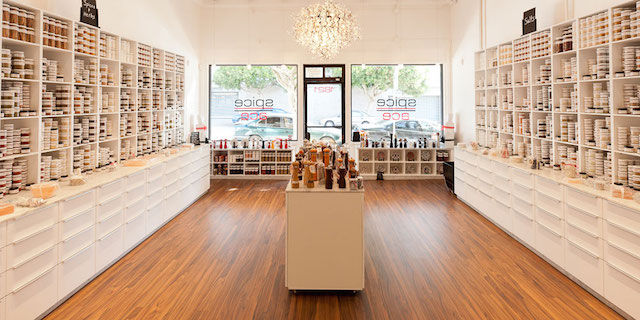 Spice Ace
Fenugreek, nigella seed, mahlab, carrot powder, Vietnamese cinnamon. There is no spice or blend thereof that Spice Ace does not peddle — or, at least it has around 400 of them in a pristine, lovely storefront. Prices and availability are listed online, and staff are friendly and helpful on the phone. So, next time you need, say, Whiskey Smoked Brown Sugar, you know where togo. — Caleb Pershan
1821 Steiner Street between Bush and Sutter Streets 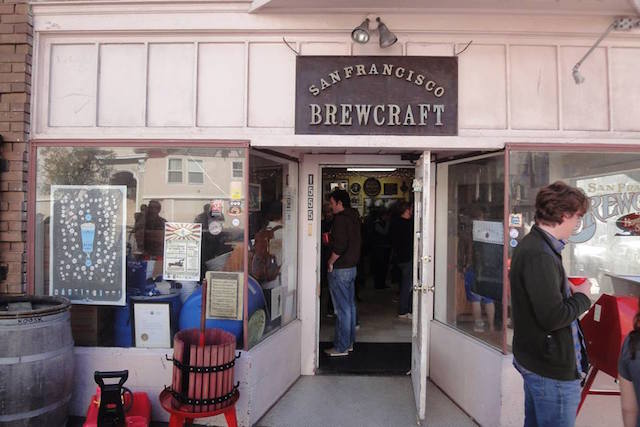 San Francisco Brewcraft
Though it finally has some local competition in the new brew supply shop from Black Sands, this Richmond District destination for the DIY drinking set isn't going anywhere anytime soon. Here, helpful staff will teach you everything you need to know about wine and beer making, as well as brewing up concoctions like root beer and kombucha. Want a beer tailor-made for your tastes? They'll do that. Hell, even the pros stop by for ingredients and replacement parts, — especially those who got their start with equipment and guidance from the likes of Griz, the shop's owner from the '90s on who passed away in 2013 and was legendary among local brewers for his crass, clever classes and sage advice. — Caleb Pershan
1555 Clement Street at 17th Avenue 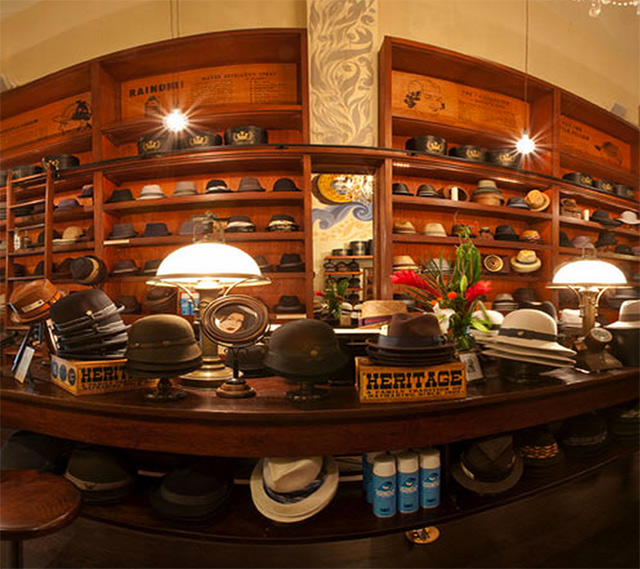 Goorin Bros. Hat Shop
Say what you will about the hat trend among young men and women, hats work for some people, and this old-school haberdashery is just the place to get one properly fitted and suited to your head. And while the place may feel eons old, it was actually opened in 2006 in this flagship location, just as hats started trending again  the brand goes back about 100 years and four generations, but was recently revived and revamped, with dozens of locations across the country. From pageboy caps to straw fedoras to "Heisenbergs," this place will fill all your head-covering needs.  Jay Barmann
1612 Stockton Street; 111 Geary Sreet; 1446 Haight Street at Ashbury 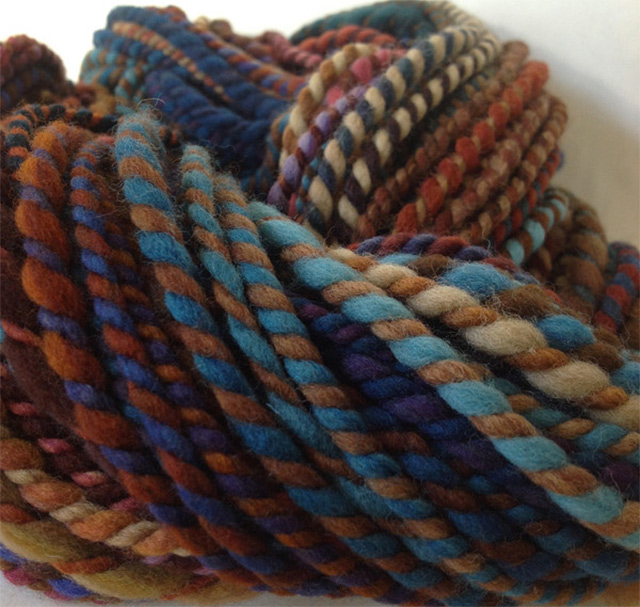 ImagiKnit
From Merino wool to llama to alpaca and angora, this is your ultimate neighborhood yarn shop that also hosts knitting classes and sells all kind of knitting equipment, patterns, and magazines. As knitting became en vogue (kind of like hats) among a new generation, the store took off after owner Allison Isaacs opened it in 2002, expanding into the next-door storefront as well. Now the place is chock-full of yarn, in every corner, and you might just want to check out their Pinterest.  Jay Barmann
3897 18th Street at Sanchez A scene from one of Olive This Olive That's BYOB parties. Daniel S/Yelp

Created by Eduardo Aguilera in 2004 and meticulously maintained by Colleen Yerge, the Lands End Labyrinth, which SFist profiled in a list of seven just last month, has vanished. Though the stone pattern

The cellphone video above that we showed you on Monday via reporter Chaédria LaBouvier has now prompted a wave of media coverage and an incident review by the SFPD and SFFD. Both departments

—
The 12 Best Niche Stores In San Francisco
Share this