Somebody in the Inner Richmond has this fairly large house that they wanted to lease for top dollar. The strategy: stuff enough beds in its four bedrooms so that it sleeps 13, and put it on Craigslist for $10,000 a month. Hey, tech dorms are all the rage! Twentysomethings who work all the time don't care! And if a savvy one among them can get a dozen friends together to pay $800 a month, he or she could live for free! But look at the pictures, ladies and gentlemen. Should people really be living like this who aren't in a suicide cult?

It's obviously being marketed as a short-term rental, but the landlord doesn't want to be bothered with vetting all the tenants himself, he just wants somebody to give him $10,000 a month and take care of it. 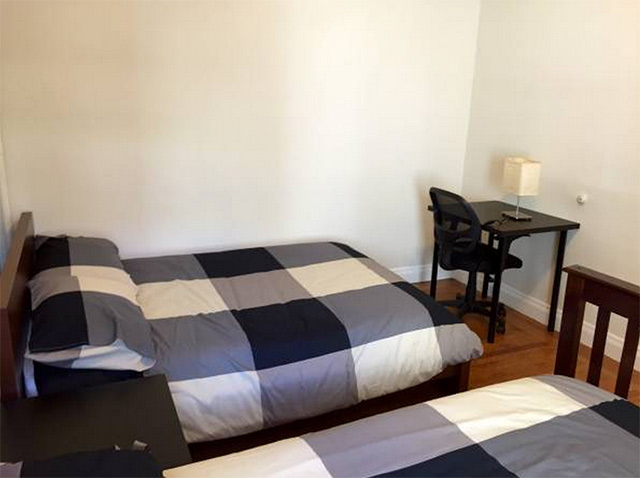 There's a "30-day minimum stay" if that tells you anything, and it comes furnished, just like this overpriced corporate rental we looked at last week. Only that was near the Mission and Dolores Park, and this is in the Inner Richmond, which may present challenges to those who want to commute downtown on something other than the 38-Geary.

But let's get back to those bunk beds for a minute. This is a four-bedroom house with one full bathroom. Yes. One shower. The second bathroom is a half bath. So you're going to try to cram 13 goddamn people in here? Like, you could have not shoved that bunk bed in there and said the place sleeps 11 and I'd still say you're a greedy asshole and 11 people can't share one shower.

But once again, the Apartment Sadness column runs up against a sad, difficult truth: These options only exist because someone will accept them as their reality.

The photos of the other two bedrooms are weirdly pixelated, as if taken with a flip-phone at 200px wide. 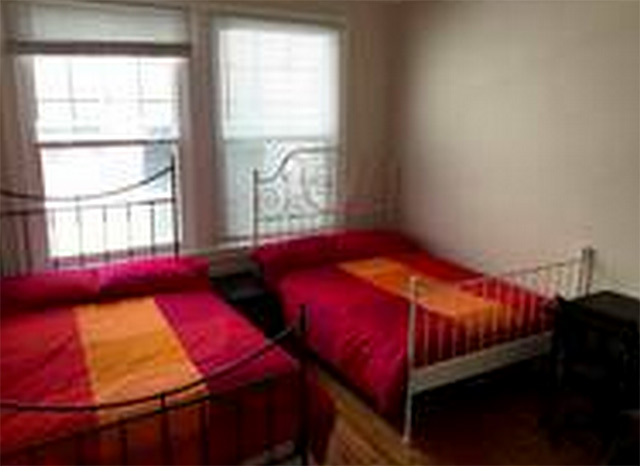 Remind you of anything? 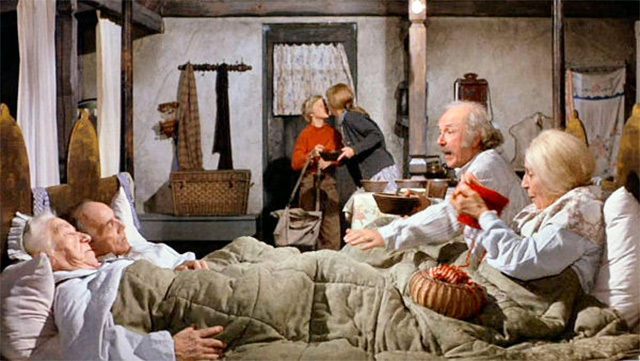 There's one "private" bedroom with a twin bed, but I have a sneaking suspicion that this is just a hallway. 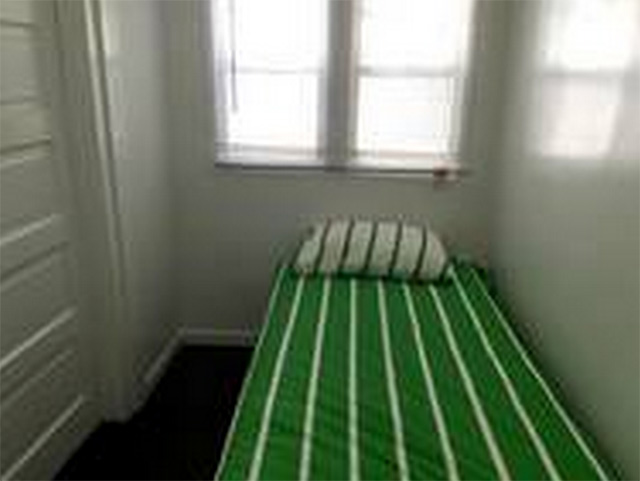 The kitchen is fine looking, and there's a living/dining area that is perfectly acceptable, but not for 13 people to share. 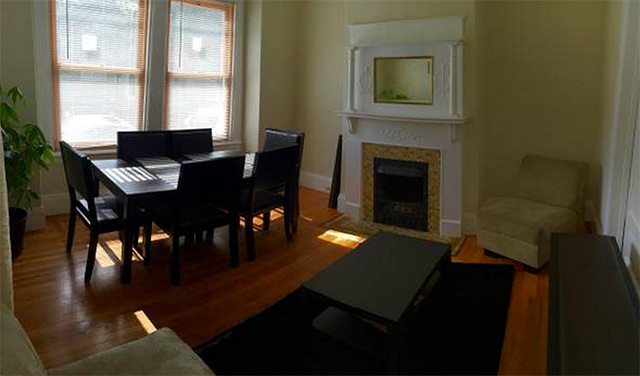 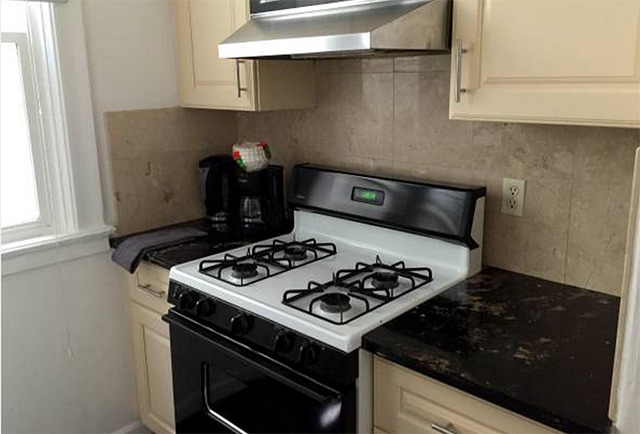 At least some other SoMa tech dorms shared by 13 people there are multiple ovens in the kitchen.

Seriously, don't you feel humiliated just looking at the pictures of those bedrooms? Even the bedspreads feel vaguely culty.

[Editor's Note: For those too young to remember, there was a cult based in San Diego called Heaven's Gate, all 39 members of which committed mass suicide in 1997 all because they thought it would help them reach some sort of spaceship traveling on a comet that came by Earth that year, Hale-Bopp. All the cult members had short-cropped haircuts and wore identical Nike sneakers, and they all died like this, on bunk beds and cots, after a farewell meal at Marie Callender's... 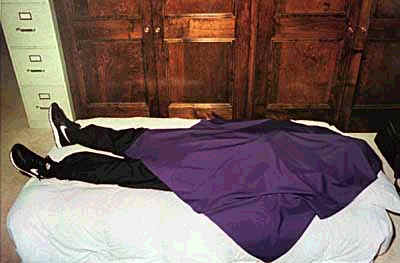 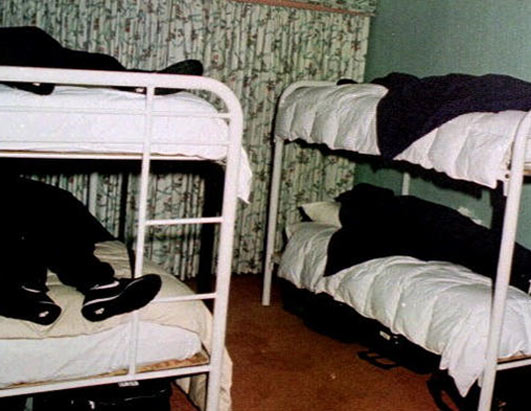 If you're still curious about this place, have very little dignity left (or you're an entrepreneur type who wants to gather 12 roommates and turn a profit, which is technically against the law by the way) and you wanted to know what that one bathroom looks like... 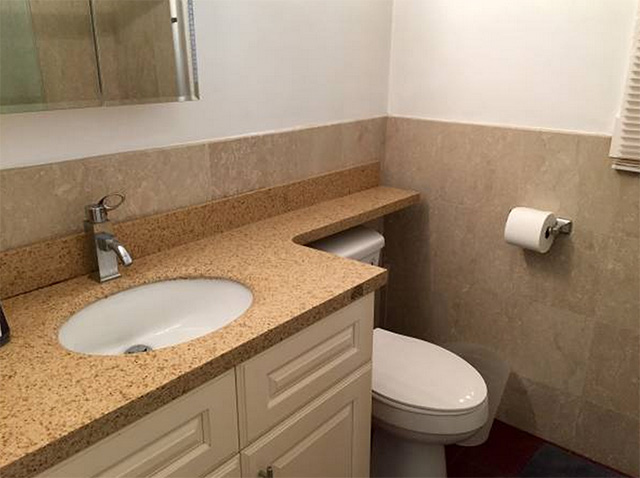 There you have it, folks. The dream of San Francisco during the Web 3.0 boom. Who needs convenience, or a daily shower, or a private living space when you can potentially live as cheaply as this, en masse?

And don't worry about finding sex partners outside the house! Clearly if the place is full, there will be plenty of furtive sexual encounters in those double beds after a few too many whiskeys on a Friday. That is if you're heterosexual and don't have high standards.

Just understand that you don't have to choose this. For $1500 a month you could be living alone in a Tenderloin basement, and for $1300 a month, the next time it comes available, you could have this lovely converted garage in the Sunset.

Living with 12 other people is no one's idea of a good time, is it? By all means, all you more-the-merrier types who still miss the sorority please go snap this up.

From Charlie and the Chocolate Factory, where all four grandparents shared a bed.

The high holy holiday on the San Francisco drag calendar that is Peaches Christ’s Night of 1,000 Showgirls takes on a special significance at Saturday night’s annual screening and party,

Last night's sunset combined with the storm clouds around the Bay Area and the moisture in the air produced some stunning scenes, including a rainbow over AT&T Park. Above a shot

—
Apartment Sadness: A Four-Bedroom, Eight-Bed House Perfect For Your Cult
Share this