Good drinks tell a story, and this is the story of those drinks. Here, we'll be serving up a remedial cocktail lesson for bartending beginners to help you get the most out of your glass, with recipes, interviews, and histories coming right up.

My introduction to the intersection of coffee and alcohol — the nervous system equivalent of doing a split while waterskiing — was a drink sometimes called "The Champagne of Maine." That nickname for Allen's Coffee Brandy is a nod to its position as the state's top-selling spirit, one it's held for more than 20 years. With a population of 1,300,000, Mainers consumed nearly one bottle for every resident in the year 2008. But that was a rough year.

Alas, as is usual, I was way behind the times. Surreptitious tipplers have been sneaking booze with their coffee for as long as the two drugs/beverages have been available in any proximity. For an early example, take this line from the 1835 novel Le Père Goriot by Honoré de Balzac. "It was a characteristic trait of his generosity to pay fifteen francs a month for 'le gloria,' the cup of coffee with a dash of brandy in it which he took after dinner."

Recently, the combination of alcohol and caffeine, at least as sold in bottles and cans, has been limited following the very public rise and fall of Four Loko. That toxic sludge became a scourge on college campuses and was the subject of a 2010 Food and Drug Administration warning.

If you ask me, such an elixir is best enjoyed in its tamer forms, most notably the classic combination of coffee and whiskey better known as Irish Coffee. Here in San Francisco, that means a trip to Buena Vista Café, a location that claims to be the drink's American originator. To this day, the bar and restaurant traps tourists and locals alike with what must be thousands of mugs of the stuff each day.

The story there, as you'll encounter it on the back of the menu, is that San Francisco Chronicle travel writer Stanton Delaplane imported the recipe from an Irish airport he frequented. The airport's chef, a man named Joe Sheridan, claimed to have invented the drink on a frigid winter evening in the '40s to doubly warm up a group of American passengers. Delaplane was quite the salesman, making sure to mention the drink whenever possible in his column. He even worked with then San Francisco mayor George Christopher, the owner of a dairy, to devise a method for expertly floating cream on top of the beverage. It does sit there rather nicely.

At just around the time of the Irish Coffee's inception, another drink, the Black Russian, began to take hold. That concoction was the brainchild of Gustave Tops at the Brussels’ Hotel Metropole, devised as a signature drink for an American ambassador to Luxembourg. The first mention of the more popular White Russian, a variant with cream, came in the November 21st 1965 Oakland Tribune in an advertisement for a coffee liqueur company. No, it wasn't Kahlúa, which has become closely associated with the White Russian in no small part thanks to The Dude and The Big Lebowski. In that film, Jeff Bridges' character alternately refers to the drink as a "Caucasian." 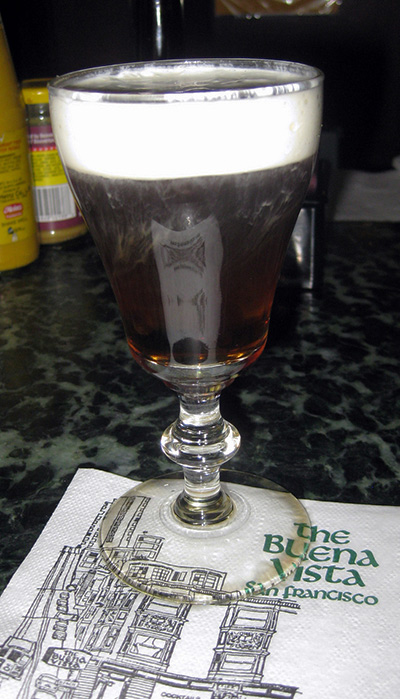 Not just a complement to booze, coffee has often served as cover for it. That calls to mind the House Cappuccino, a classic of Tosca Cafe, a San Francisco bar that opened just before the beginning of Prohibition. Undeterred, the establishment began serving an inconspicuous "House Cappuccino." As longtime proprietress and grand dame socialite Jeanette Etheredge, who handed off her operation to restaurateurs Ken Friedman and April Bloomfield in 2013, explained to Bon Appetit, the the drink "Was invented during Prohibition. It’s Ghirardelli chocolate and milk, and then we steam it up in the machine and add a shot of brandy. It has no coffee... it was a way for them to sell booze illegally." You can still get one these days (the revamped version is made with Armagnac, Buffalo Trace bourbon, and Dandelion Chocolate ganache), but you'll need to show ID.

Heat the coffee, whiskey and sugar; do not boil. Pour into a glass mug and top with cream; serve hot.

Former SF Weekly investigative journalist Joe Eskanazi was on the perplexing case of Marilyn Hartman for San Francisco Magazine in recent months, tracking her down first at the Florida jail where she landed

It's hard not to feel bad for Kanye West. Known once as a clever, talented musician who fearlessly brought truth to power, in recent years he's become a parody of himself, with stunts

—
Learning To Drink Vol. 19: The Coffee Cocktail Abides
Share this