My apologies for the hiatus. There was Memorial Day weekend and then last Friday rolled around, the tip line was quiet, and there simply wasn't an apartment worthy of my depression as May came to a close on Craigslist. But now, thanks to not one but two different tipsters, I have something perfect that needs to be discussed immediately. So why wait until Friday?

Assuming this isn't a prank, what we have here is a box truck, ladies and gentlemen. It isn't really masquerading as anything else, but if were you to be searching for apartments under $1000 in the vicinity of Lower Nob Hill in the last 24 hours, you would have come across it. It's listed as "Box Truck Apartment" to be clear.

The author, whom I've tried reaching out to directly, states that he had been using this truck as his own living situation, and now he wants to rent it out, for his own financial gain, as living space rather than sell it because he has to leave town, perhaps temporarily. "I have to move from SF," he writes, "and this was a project i was working on- It's a box truck that I had just put wood flooring in and started to use instead of renting an apartment."

It's a "project," you see, which makes him sound possibly like an artist of some kind, and not just a ridiculous shyster.

Here's the only other photo, which is an exterior shot. He wants $800 a month for it, so that's reasonable. 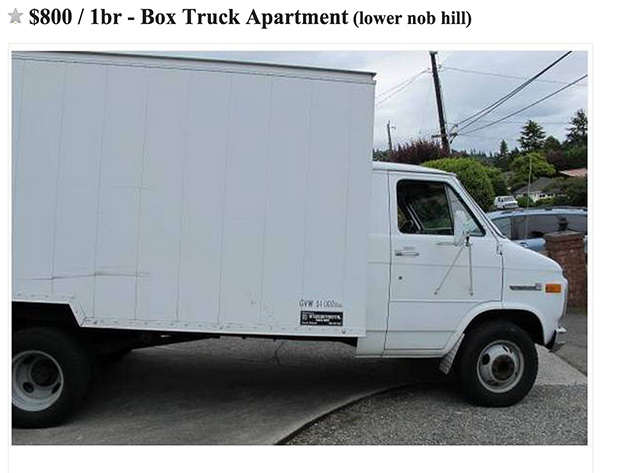 Assuming you are sad, poor, brave, indiscriminate, and desperate enough to be in central San Francisco to consider this as a housing option, here are some other details: It can be parked virtually anywhere in town, however it's unclear how the poster will prevent you from just driving it around at will  he states that he wants "to rent it as a living situation instead of a driver for liability reasons." So, he doesn't want you crashing the thing and impacting his insurance, so somehow you'll need to find a place to park it where you won't have to move it and where no one will be perturbed by seeing you rolling up that back door and going in and out of it every day.

But wait a second  how am I even treating this as a viable situation?! Well, I suppose if Google employees can live out of campers in parking lots on the Google campus, why shouldn't someone be able to camp out on Hyde Street, shop at Trader Joe's, and crash in the back of a truck, because that's totally not the same as homeless.

The poster suggests parking it near a 24 Hour Fitness, where for $15 a month he enjoyed gym workouts and amenities like water and plumbing.

You might also  if, again, you're in bad enough shape to consider this for $800 a month  want to park it in the vicinity of a friendly café where you can charge your electronics for hours on end, because without battery power and a computer, you will be living a dark, quiet existence in your box truck apartment. You certainly won't be having friends over who aren't nearby drug addicts seeking shelter from the elements.

Has it really come to this, though? Have you been disowned or have you recently left rehab or jail? And if the latter is the case, are you planning to steal this truck and take it to Canada as soon you fork over your first month's "rent"? Because that's not nice, though it is perhaps what the owner of this truck deserves trying to get away with this bullshit rather than just selling the thing and moving on.

Is he planning to come back from his artist's retreat or whatever in two months and evict your ass? Because that seems highly possible as well. You are, after all, renting a truck you aren't allowed to drive because you couldn't find anywhere else to live, so all bets are off, friend. And I wouldn't expect that "lease" to hold up in People's Court.

This could be yours.

Robin Williams' kids and his widow Susan Williams (née Schneider), and their attorneys, returned to court yesterday to hash out further details of their ongoing dispute over the late actor's will. The attorney

See and be seen at these select San Francisco shows, parties, and events. You know, because you can't read the Internet all the time. TUESDAY, JUNE 2 WINE AND FILM: This season, Top