If you see a woman getting attacked in the Outer Sunset Thursday night, check the address. If you're on Taraval Street near 30th Avenue, it's not a violent altercation — it's art.

According to a filming notice tweeted by the San Francisco Film Commission, Academy of Art student Laura von Ins will be shooting a Student Thesis Film entitled "Somnia" on the sidewalk in front of 1940 Taraval Street (that's between 29th and 30th Avenues) from 6-9:30 p.m. Thursday.

During the shoot, passers-by might be shocked to see a woman pepper spray a man, who then falls to the ground. But it's cool, says the filmmaker.

"Please do not be alarmed," the filming notice reads, "these scenes are not real." 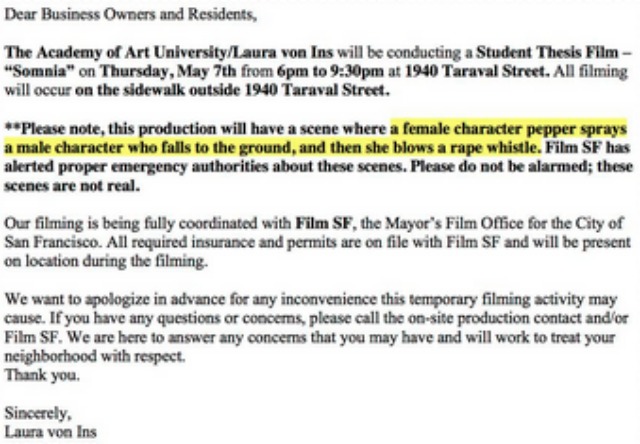 According to its Indiegogo page, "Somnia" is "A short rom-com film thesis project showing the story of how a guy imagines making the first move." From its synopsis:

In a bar, Matthew and Callie don’t know each other yet, but when they will lay eyes on each other for the first time, they will approach each other in a way that no one can control - their imagination. Both in their late 20s, Matthew and Callie are single and ready to mingle... well sort of. They are both extremely shy when it comes to talking to people of the opposite sex: they fear they might freeze, or fall, or say something stupid, or be interrupted by the waiter or a robber... overall, they are afraid of making a fool of themselves. So will they manage to talk to one another? Will one of them leave the bar without saying a word? Will the end up married with 8 children?... We won’t know for sure until they approach each other for the first time.!

I'm starting to see how the pepper-spraying thing fits in! But, anyway, good luck to the fledgling filmmakers. Here's hoping Matthew and Callie get their shit together, and that everyone involved gets a passing grade.

Yep, it's Cinco de Drinko again, a.k.a. St. Patrick's Day for margaritas, a.k.a. another excuse to get drunk after/during work. Assuming you're a professional imbiber and you wouldn't

—
Don't Be Fooled By That Violent Outer Sunset Attack: It's Art, Not Crime
Share this