The Market on Market, which opened in the Twitter building in January, is moving along with plans for Polk Street. At the corner of Polk and Clay, the team plans to renovate the former Big Apple Grocery space and add a whole lot more. 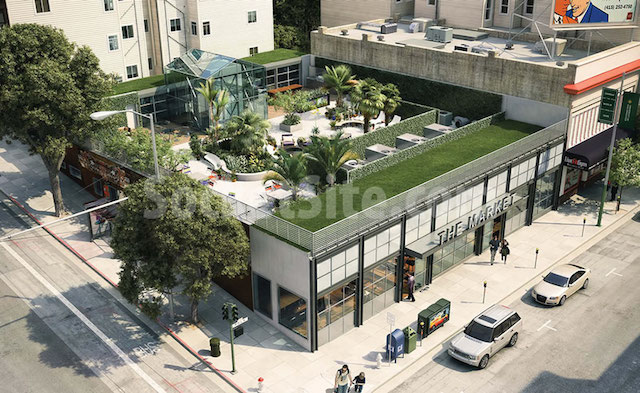 Planning Commission approval is required for the project, and its size and roof deck will be evaluated at a hearing on April 30.

A chain has always been part of the plan for the team behind The Market on Market. Last October, The Chronicle wrote that after the Polk installment, a third deal is in the works for the Lumina complex, a SoMa condo site that set records when it listed a penthouse for $49 million. There, a 10,000-square-foot store could be the next step for The Market team.

And with another unrelated epicurean epicenter headed to a new building at 2175 Market, it's certainly a trend. Inside Scoop reports that the Myriad, which advertises itself as "much more than mom's market," will occupy a 4,000 square foot space with room for 10 to 15 small businesses.

Previously: Photos: The Market On Market, A Massive Home-Grown Food Hall In The Twitter Building

Remember how two years ago everyone was saying "the kids don't use Facebook anymore because it's uncool and their moms are on there?" Well, it turns out that isn't really the case, at

Richmond District bank robbed at knifepoint. [KRON4] Mark Pincus returns to Zynga (which still exists!) as CEO. [Associated Press] Annette Bening will be getting an honorary degree from SF State this May. [SF