Last week in Santa Cruz, police say that a person who appeared to have been assigned the gender of male at birth dressed in female gender-expressing garb as they robbed a bank. Is the thief "merely" a male bank robber donning a cleverly-distracting disguise, or is this case more than meets the eye?

At 3 p.m. Friday, the person you see pictured above handed a note demanding money to a teller at the U.S. Bank at 110 Morrissey Boulevard in Santa Cruz.

The teller complied, and the suspect left with an undisclosed amount of cash. No weapons were used and no injuries were reported.

According to Santa Cruz Police, who have dubbed the crime the "Mrs. Doubtfire Bank Robbery," the suspect was wearing a wavy blond wig, prescription glasses, navy blue scrubs and a light purple long-sleeved undershirt.

Judging by the photos, the suspect appears to have carried a tan leather purse, as well.

“When the bank employees contacted the suspect, they were surprised to see that although the suspect was dressed like a female, the suspect was actually a male,” Santa Cruz police said in a statement.

However, when contacted by SFist, Santa Cruz police spokesperson Lt. Bernie Escalante said it is indeed possible that the suspect is a transgender woman.

"I guess anything's a possibility," he said. "That isn't ruled out."

Acknowledging that "there are several different stages when you're undergoing gender reassignment" he noted that the suspect looked great deal like a man, and apparently sounded like one too.

According to Escalante, about an hour before the robbery, the suspect was believed to have "cased" a Rabobank at 3110 Mission Drive in unincorporated Santa Cruz County.

When staffers there heard the suspect's low, masculine voice, "that was a tipping point for them" in terms of believing that the be-wigged person was up to no good.

Police are hopeful that the surveillance photos will lead them to the suspect, as “somebody in the community has to recognize this person.” 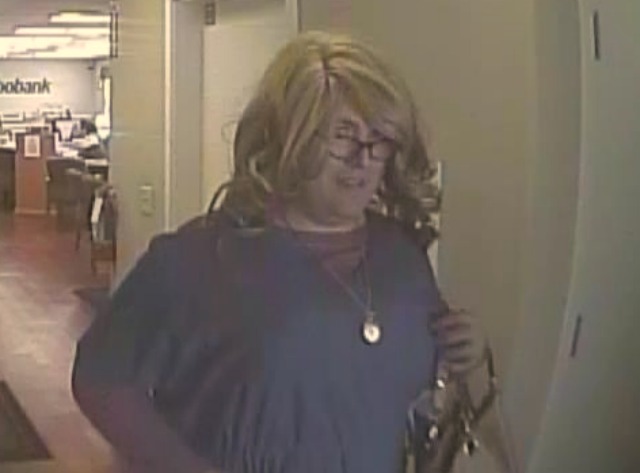 The highlight of this week's releases from the Public Defender's Office concerns the case of 41-year-old Santino Aviles, who was accused of robbery, attempted robbery, burglary, and assault with force, as well as

Attention all Uber X and Lyft drivers, their passengers, and all those of you who own cars and are going to try to use Van Ness or Franklin to get yourselves to the