Alice Brown had been headed down a dangerous road for a while, if court records and statements from family and friends are any indication. That road turned into a dead end Tuesday night, when San Francisco Police Department officers shot and killed her after a strange and dangerous attempt to flee from/drive into the cops at Pine Street and Van Ness Avenue.

If you missed it, here's what happened: two plainclothes police officers approached Brown as she sat in a Van Ness gas station on reports that the car she was in was stolen. According to SFPD, she drove towards the officers, the wrong way down Pine (twice) and into a building and several cars before police shot and killed her, in fear for their safety and for the safety of the many innocent bystanders at the scene.

This wasn't the first time Brown has had a brush with the law, the Chron reports.

According to court documents, Alice Brown was arrested on a variety of larceny- and drug-related crimes since 2009, but many of those charges were dropped before they reached prosecution.

In 2013, she was arrested for damaging or taking a vehicle. In a separate incident that year, she was arrested for driving under the influence of drugs or alcohol, disobeying traffic control devices, failure to obey a peace officer, driving on a suspended or revoked license, identity theft, theft by fraud and possession of drug paraphernalia.

Those charges were dismissed, according to court records, but in 2009, she was sentenced to probation after pleading guilty to a narcotics-related misdemeanor.

Her probation was terminated within a few months after she was picked up for a series of drug-related charges. Alice Brown pleaded guilty to possession of a controlled substance for sale and was subsequently sentenced to two years in county jail for violating her probation.

You might have guessed that Brown was in trouble from the last public post to her Facebook page, from September 2014, in which a friend urges her to get in touch and to resume her recovery. 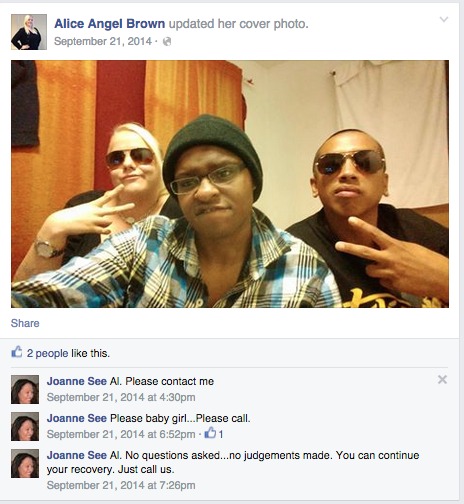 According to Brown's brother Andy, an SF resident who spoke with the Chron, for over a decade the 24-year-old woman had been cycling in and out of rehab programs, getting clean then returning to a life of drugs and crime.

A look at her Facebook page demonstrates that cycle, with photos of Brown as she passed through good and bad patches. For example, a photo posted in May, 2014, was captioned "clean and sober almost one year. Imagine how good I'll look in another year!!!!!" 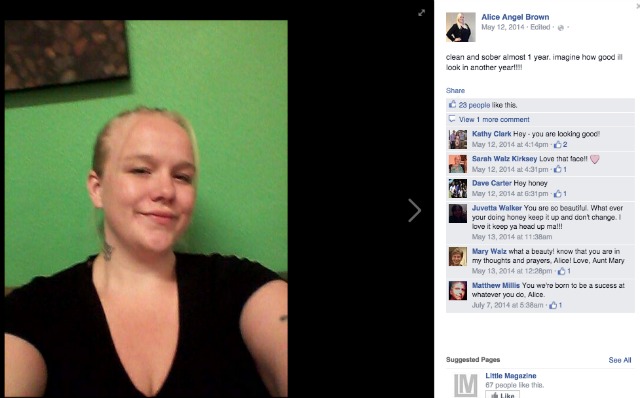 At some point between then and now, however, that sobriety apparently fell by the wayside, as on Monday, an SF judge issued a bench warrant for Brown's arrest after being told that Brown had ceased participation in a drug treatment program she had agreed to attend to remain free.

According to her brother, that was par for the course for Brown, who he says was "buried under layers of addiction, and mental illness was right in line with that.”

“She couldn’t have been sober," her brother says, when she had her fatal confrontation with police Tuesday night, though police have yet to release any toxicology details.

However, more information might be available at Monday's SFPD town hall on the shooting, planned for 6 p.m. at St. Luke’s Episcopal Church (1755 Clay Street).

Brown's problem, her brother said, “was that she was a runner. She ran away from home as a child. She couldn’t stick."

In the style of Hayes Valley's Proxy development, another converted shipping container haven for retail and treats from coffee to beer, this one called The Yard, is opening tomorrow. At Mission Rock, it's

At nearly 150 years old, Sam's Grill reopened to much relief last year after a mysterious three-month closure. At the time, loyal patrons got together as investors to save the institution, whose building

—
A Cycle Of Crime And Addiction: The Short Sad Life Of Alice Brown
Share this