Two new expensive luxury condos just hit the market  and given what I've been hearing about the market will probably not stay there long  on the ever-desirable South Park in SoMa, listed for a combined $8 million. As SocketSite shows us, there's a second-floor, three-bedroom unit listed for $2,995,000, and a duplex "penthouse" unit, spanning the third and fourth floors with a terrace and roof deck, listed for $4,995,000. Assuming it sells, that beats the current record-setting price for a South Park condo which was set in 2011 for a $3.5 million duplex three-bedroom, also with a roof deck, which went for $200,000 over asking.

There are elevators connecting both units to the garage. And it looks like a restaurant will be going into the ground-floor space facing the park.

$5 million is starting to sound very middle-of-the-road after last week's news about the ginormous, 15,000-square-foot penthouse atop one of the LUMINA towers downtown, which just got listed last week for a cool $49 mil.

But of course, almost none of us can afford any of this.

Sidenote: South Park was, historically, always a tony address, and was originally built as a wealthy enclave of single-family homes. Modeled on a square in London, with its oval-shaped park at the center, it was constructed in 1855 by British entrepreneur George Gordon, who originally constructed 58 residences including 17 mansions. Many of the buildings were destroyed in the 1906 earthquake and fire, though a few remain, and the neighborhood lost its exclusivity shortly after the construction of Second Street. During the 1990s dot-com boom it again gained caché as both a hub of new tech offices and a cool residential oasis.

Below, a shot of the roof decks, from the front. 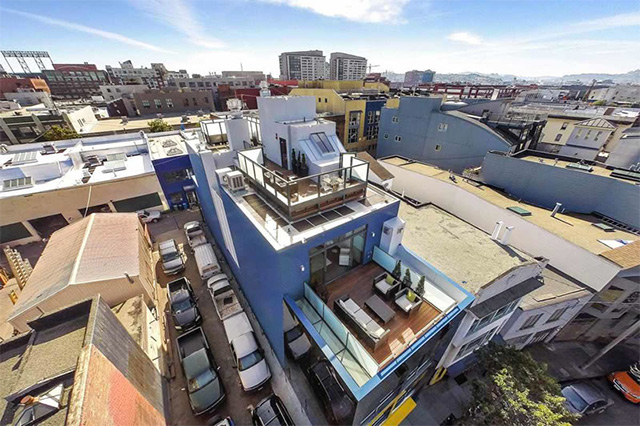 Related: LUMINA Penthouse Palace In SoMa Lists For $49 Million, Most Expensive In SF

It was 1999 when San Francisco's City Hall unveiled its controversial full-body makeover. All jeans were high-waisted, your cell phone had buttons, and the dot com bubble was busily expanding, as then-Mayor Willie

We've been talking a lot about troubles and general weirdness at Dolores Park lately, from bottles smashed in a sandbox to their guinea pig encampment to vandals who caused over $100K of damage

—
Here's What $5 Million Buys You On South Park
Share this