Apparently a plan has been taking shape for several months to install a parklet/plaza on the block of 12th Street outside the Eagle Tavern in SoMa that would recognize the neighborhood's history in the gay leather community. As the BAR is reporting, preliminary design ideas for "Eagle Plaza" include decorative pavers in the colors of the leather pride flag (blue, black, white, and red), and benches that double as monkey bars. What, no bondage pinwheel?

There have been some community charrettes about the design going back to September, and the owners of the Eagle are fully behind the idea, despite the fact that it will mean the loss of some street parking. For her part, Supervisor Jane Kim says, "I am super excited about it. I think it is beautiful."

The plan for the park has been coming together as a perk to the neighborhood by developer Build Inc., which wants to build a large "co-living" commune-type thing that we heard about last year on the property across the street from the bar, at 1532 Harrison Street. The idea is to have commemorative plaques about the history of the neighborhood, spaces for performances and food trucks, and as you can see in the sketch below, the ability to drive emergency vehicles or whatever through the middle of it, if necessary, by using modular roadblock elements. UP Urban Design is helping with the project, and they also worked with Build on another plaza outside their soon-to-be 111-unit residential project at 650 Indiana.

The residential project on Harrison will contain a whopping 235 units separated into 28 "co-living houses," each with 11 suites, divided across three buildings. As we reported earlier, this umpteenth dorm-esque project will provide basically just private sleeping spaces of 327 to 409 square feet with two-burner stoves and small bathrooms, and then all living spaces and bigger kitchens will be communal.

And as you can see on the official website for the project, there's going to be a community unveiling of the draft designs on Sunday, during the Eagle's weekly beer bust, between 3 p.m. and 6 p.m.

That would be the time to suggest that all the jungle gym equipment be able to double as makeshift torture devices during Folsom. 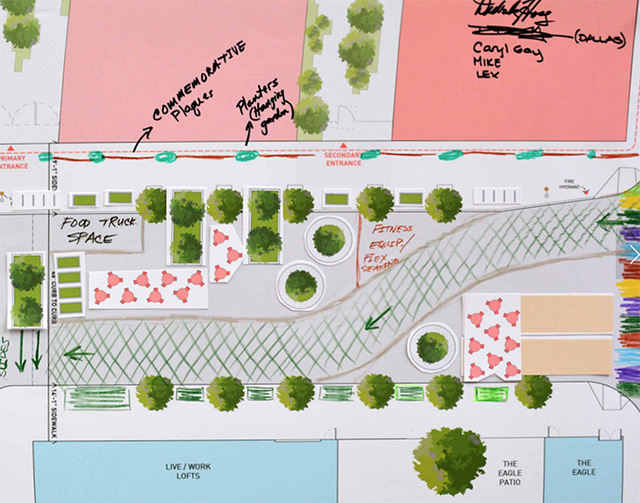 Previously: New SoMa Development Is Like a Fancy SRO For The Middle Class

Rendering and sketch courtesy of UP Urban Design.

Five-year-old Radius (1123 Folsom Street) is giving up the ghost, as Inside Scoop reports, and will be morphing into two new concepts over the coming months. The restaurant will serve its last dinner