We're a little behind on this one, but a quiet storm of food-obsessed tweeting and Instagramming has been drawing cult-like crowds to the door of tiny Tenderloin bakeshop Mr. Holmes Bakehouse (1042 Larkin Street) for the last month or two. Why? Because everyone loves a perfect pastry, because San Franciscans love to stand in lines, and because the food-obsessed have been itching for something new to gush about on social media ever since the cronut craze died down. Enter the cruffin.

Three-month-old Mr. Holmes didn't invent the cruffin, of course  the pastries seem to have originated around 2013, as a logical next mashup after the cronut  and as you can see via the Instagram tag, they can be found in pockets all over the country. However Mr. Holmes' versions are foodgasm-worthy enough to have inspired some passionate fans and special media attention.

Also on offer at Mr. Holmes are some beautiful doughnuts, croissants, and other fine pastries. But I have to say I take issue with the kind of gross-seeming (I refuse to try it), stretch of a Frankenfood called the California Croissant, pictured below. What is it, you ask? It's a salmon sushi roll inside a croissant. 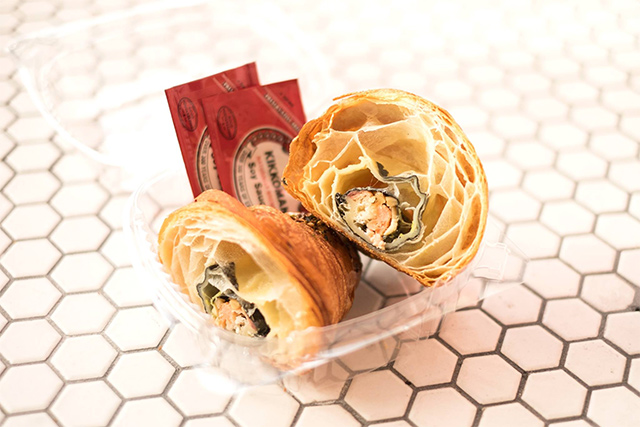 Call me a Philistine, but I still won't go to Sushirrito either.

Anyway, Mr. Holmes has proven popular enough in just three short months that the owners, Ry Stephen and Aaron Caddel, just told Eater that they're already on the hunt for a bigger space in SF, and a space in LA too. "We really didn't anticipate that this would go this well," says Caddel. Well, welcome to the land of Instagram-driven food fads.

That's a sushi roll in side a croissant. Photo: Facebook

Two people, both reportedly armed, were shot and killed by Bay Area police officers in separate confrontations at nearly the same time Tuesday. In one case, a Contra Costa County Sheriff's deputy shot

A year after the Golden Gate Bridge saw more suicides than it ever had before, that number has decreased, according to a group devoted to preventing people from taking their own lives on

—
Regarding The 'Cruffin' Craze Currently Gripping The Tenderloin
Share this