Two upsacale Mission district businesses, Gracias Madre and Salumeria, have been tagged with graffiti in as many days. The writing on the former reads "White People Trying to Be Mexican, Fuck You." Over at Salumeria, as spotted by a tipster to Uptown Almanac, read "Dear Hipster$ You still suck. Go Home." 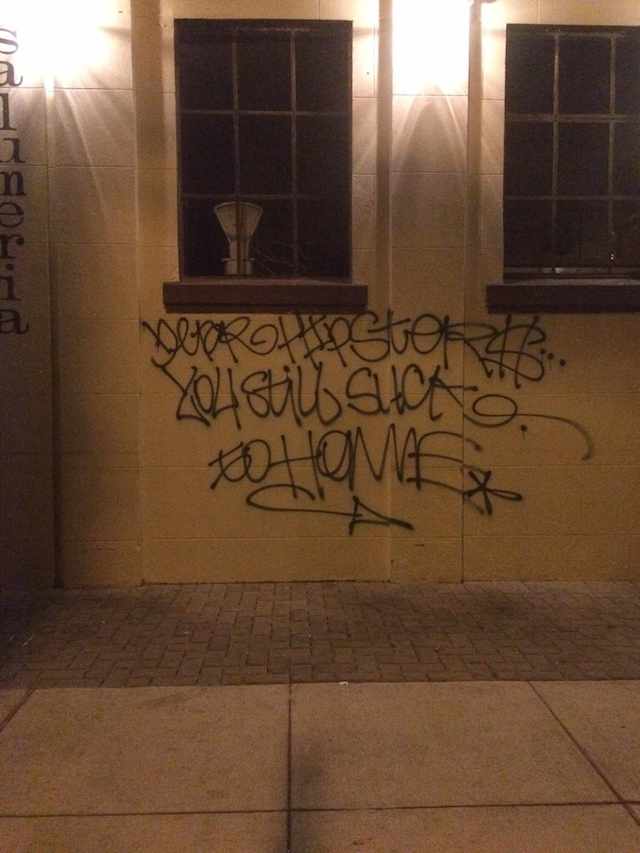 Gracias Madre arrived on Mission Street between 18th and 19th Streets in 2010; Salumeria on 20th between Alabama and Florida in 2012. The Gracias Madre graffiti appeared today while the Salumeria graffiti showed up yesterday.

Few would call Gracias Madre, a vegan Mexican restaurant, highly traditional. Yet the 2010 spinoff of Café Gratitude, a small chain of vegan eateries known for sourcing much of its ingredients from an organic farm in Vacaville, has been pretty popular and well received from the beginning. The Chron's Michael Bauer, who enjoyed the restaurant after its opening, recently returned for a follow-up review, still giving it two stars for "bold and sophisticated" seasoning but finding the service lacking.

Salumeria, the European-style deli project from Flour + Water, comprises two locations. The charcutier peddles meats, cheeses, and lunch items, such as a signature salumi sandwich. Some sandwiches can cost $12, as many like Uptown Almanac have been keen to note.

But it's still true that upscale businesses are still getting flack in the traditionally working class Mission, despite the gentrification ship having sailed in the 'hood over a decade ago. A notable recent example: Local's Corner, who, tired of graffiti reading "Die,” “Get Lost,” and “Keep the Mission Brown" and plagued with other problems, threw in the towel at their 23rd and Bryant outpost last November.

Graffiti on Salumeria via Uptown Almanac

Hey, remember that mysterious dead body police fished out of Lake Merced last month? Today we have a few more details on the deceased, including gender and skin color. Christopher Wirowek, speaking for

Supervisor David Campos has come back to the Board with a new, dialed back version of the Ellis Act payout legislation that was previously passed and took effect last summer  only to be

—
Gracias Madre, Salumeria Both Tagged With Anti-Hipster Graffiti
Share this