What if I told you that the Apple Watch was already out there, and had been since 1995?

At that, some Apple fanboys might self-destruct. But the true fans would know that Apple introduced a very '90s timepiece back then as a gift for upgrading to a new Mac operating system. As you anticipated, it's a dumbwatch, but it looks smart... in a retro way. Or perhaps not.

Regardless, you can now bid on one at the "Original Watch Store" which is the creation of a former Apple distributor who had a pile of them in storage, along with a former "editor-in-chief of a top-30 Apple blog" (sidebar: wow!). From the site: "It is the sole nineteen-year-old predecessor to a new generation of Apple Watches that this generation overlooked: a 20th-century version that was simply unmistakably Apple." 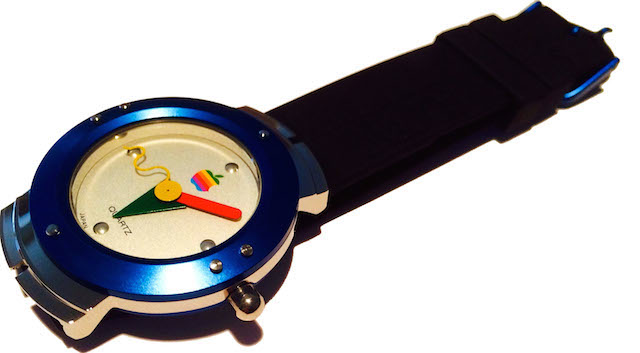 That said, it doesn't look too much like the forthcoming Apple Watch that we previewed back in September, which is to say like this.

On that front, 9To5Mac revealed some details as to the functions of the new Apple Watch. They discovered a companion app in development for the iPhone from which you'll be able to tweak the settings on the watch. You'll also — are you sitting down for this — be able to monogram the watch, or rather, enter your initials and have them display on the home watch screen with whatever clock feature you choose. We now know you'll also be able to keep stocks on your home screen so you can keep track of them.

The new Apple Watch is rumored to have a March on-sale date which is still TBA.

All coverage of Apple on SFist.

Many of you may recognize the always black, powered-down, street-facing video panel on the side of Moscone Center West. But most of you probably have never seen it turned on and were not

The furry pink front bumper mustache on Lyft's fleet of cars was equally iconic and annoying. So, in a rebranding effort, it's been shaved and replaced with a small, arguably more tasteful, glowing

—
Check Out The Original Apple Watch (From 1995)
Share this