The furry pink front bumper mustache on Lyft's fleet of cars was equally iconic and annoying. So, in a rebranding effort, it's been shaved and replaced with a small, arguably more tasteful, glowing one.

Lyft has been diminishing its recognizable car facial hair for a while, with new drivers receiving windshield stickers a la Uber and a smaller pink 'stache for dashboards. And now, in keeping with the mustache theme, they're introducing a new, small glowing plastic mustache for drivers starting this month, as Wired reports. No word on what existing drivers will get, or if they'll be asked to ditch their current setups.

The move gives new meaning to this 2013 Uber ad. 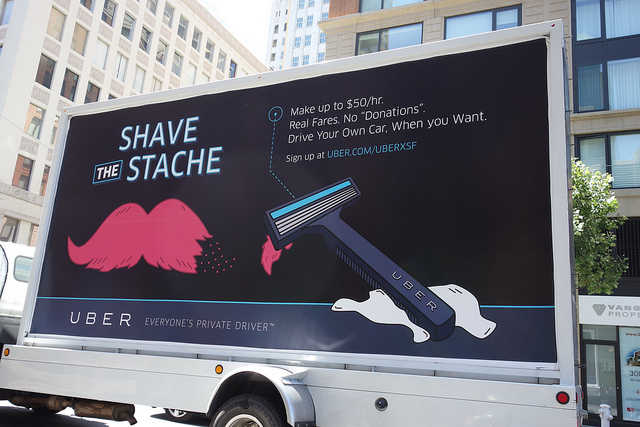 Lyft's old mustaches had several practical problems. First, before Uber pulled away as enemy number one for taxi drivers, many fixated on the mustache as a symbol of ride-sharing or ride-hailing app companies. Lyft drivers would even have to cache their 'staches on trips to the airport (before they could legally pick up and drop off there). Especially in fog and rain, they also became plenty gross. Were drivers expected to be washing them?

Further, the move to a glowing mustache was preceded by some drivers creating their own glowstaches, like this one:

Lyft's decision to keep the mustache in some form makes sense, considering their image as a fun, safe Uber alternative. Wired traces the big, furry "carstache" back to 2010, two years before Lyft's launch, and a man named Ethan Eyler. His own, presumably DIY 'stache, turned heads around town... including the head of Lyft's John Zimmer, who eventually ordered more of the mustaches from Eyler and made him brand manager at the company.

This time around, Eyler and Lyft hired Ammunition, the design studio who worked on Beats by Dre, for the mustache rebranding. After failed ideas like hood ornaments and some motions to drop the mustache for good, this was the result.

The switch comes at important moment for Lyft. sources told re/code that the company, valued at $850 million is in the middle of a huge funding round. The $330 million it's already raised is plenty, except when compared with Uber, which has collected nearly $3 billion and is valued at more than $41 billion. CEO of Uber Travis Kalanick has even, per Vanity Fair, admitted to scaring folks off of Lyft's last funding round. Lyft operates in just 60 cities while Uber has 260 to its name.

All coverage of Lyft on SFist.

What if I told you that the Apple Watch was already out there, and had been since 1995? At that, some Apple fanboys might self-destruct. But the true fans would know that Apple

Fans of the organic, vegan fine dining experience at Millennium in the Tenderloin are going to weep over this one: The restaurant announced this morning that they're being forced to close after 21