Coit Tower tourists are out of luck again today from 2 p.m. to 5 p.m. as Logan Media shoots a corporate commercial with a drone, closing the landmark and surrounding Pioneer Park. That's according to officials from the nonprofit Protect Coit Tower, who sound mighty peeved that the fire nozzle shaped landmark they've worked to protect and restore was rented from the Recreation and Park Department by a private company for a $1,500 shooting permit.

Logan Media officials explain that FAA rules require the public to stay at least 200 feet away from commercial filming drones. Logan frequently shoots high-end advertisements for high-end companies like BMW, Audi, and Marc Jacobs, so that could be what some of the fuss is about. Plus the drone thing: Most people don't really like them, do they?

“Coit Tower is a public space that belongs to all the people, and it diminishes this treasure to stop people from even seeing Coit Tower because a company wants to use a drone for its commercial,” said Jon Golinger of Protect Coit Tower. “Why is the Recreation and Park Department selling private access to this public treasure and preventing people who have traveled from around the world to visit from even taking a photograph of Coit Tower just because a corporation wants to use a drone for its commercial?”

No word on how the local wild parrots are dealing with all this, but if they're disturbed, expect a bloodcurdling public outcry. 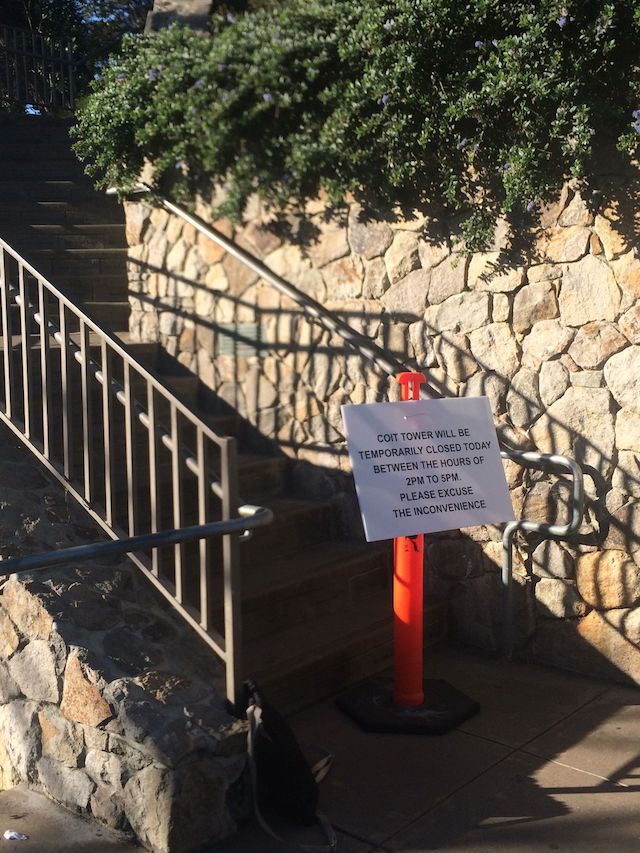 Artist Sadie Mellerio has installed this site-specific video installation for the window of hip kid magnet Madrone Art Bar which shows a time-lapse of the view outside Madrone Art Bar, at Divisadero and

If an announcement posted to both Indybay and Facebook is to be believed, your Friday BART commute might be a little trickier than you expected. According to event organizers, a day-long demonstration planned