Good news, all you East Bay party people who enjoy cavorting in the Mission: At a press conference on Tuesday morning BART and AC Transit officials are unveiling the final details of a one-year pilot program, approved by BART's board in October and earlier reported on here, which will significantly beef up late-night bus service from San Francisco to the Oakland and beyond. This is, of course, in lieu of us ever seeing 24-hour BART service in our lifetimes, but better than nothing.

How it works, according to the previously announced plan, is that the existing AC Transit route 800 which takes people from SF to Richmond BART will begin leaving from 24th and Mission BART instead of where it's been leaving from, Market and Van Ness. And from 12:30 a.m. to 2:50 a.m. buses will leave every 20 minutes, instead of every 30, meaning there are more chances for those stumbling drunk out of Mission bars to make it home to Oakland during that witching hour after BART shuts down. And after the 2:51 a.m. bus departs, buses will continue to leave from 24th and Mission every half hour, at 3:21 a.m., 3:51 a.m., 4:21 a.m., etc. See the full schedule here.

Current AC Transit fares will apply, which means $4.20 for Transbay trips, and fares can be paid with a Clipper card or cash.

You can see the overnight 800 bus route below, which has already been updated with its new terminus at 24th Street, and note this also means that people coming from downtown Oakland can make trips directly back to the Mission after 1 a.m. as well. 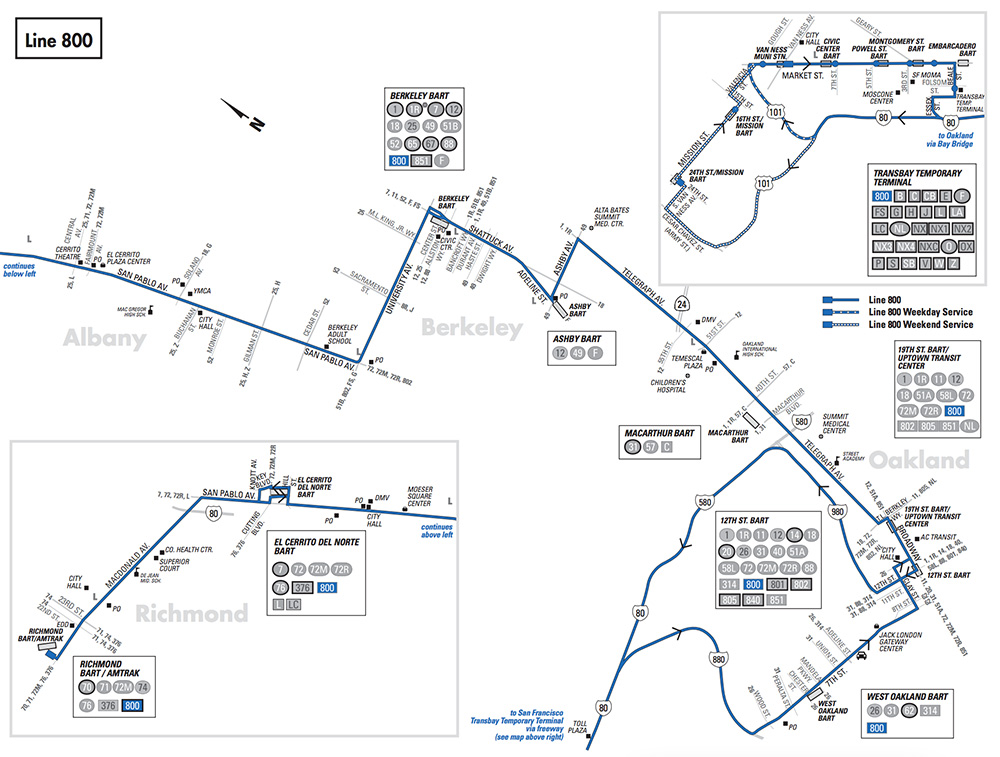 For people going further into the East Bay from SF, they're adding three new runs of the 822X from 1 a.m. to 2 a.m., ferrying people from 24th and Mission through downtown SF and then stopping at 14th St. and Broadway in Oakland, Rockridge, Walnut Creek, Pleasant Hill, and Pittsburg/Bay Point.

The complete details of the new program will be available on BART's and AC Transit's websites on Tuesday, December 9 at 10 a.m., and there may be some slight changes or updates to the above information at that time.

Presumably, these new buses will begin running this Saturday morning at 12:30 a.m., however that launch time has not been official.

Update: Here's the official release from BART. And take note they will be monitoring how much demand there is for this service during the first year of this pilot program.

The giant inflatable Pleasanton snowman will stay for Christmas after all. [CBS SF] Those expensive palm trees on the Bay Bridge? They're rotting and falling apart. [Chronicle] A USPS truck fire has damaged,

While we were distracted by Thanksgiving, the team from Wish Bar and Lounge unlocked the doors to the restored 3079 16th Street space, formerly Esta Noche, which they're calling Bond. Bizarrely, despite being