Just before 2 p.m. this afternoon a car went barreling through the front doors of Comstock Saloon on Columbus Avenue, injuring two people  though it's unclear if the driver was among the injured, or if anyone inside the bar sustained injuries.

The scene's already been documented plenty on Twitter. The car appears to be a maroon BMW, and it went directly through the front entry doors, apparently not causing any structural damage. This happened at 1:48 p.m.

According to Chronicle reporter Evan Sernoffsky, 67-year-old Patrick Hagan was very nearly hit by the vehicle.

Further updates coming as they're available.

Update: The injured parties were, in fact, bar patrons, as the Chron reports. The driver cooperated with police and looks like he might be in some trouble.

The driver, whose name was not immediately released, was traveling southbound on Columbus Avenue when he lost control at Pacific Avenue and flew into the building, Lazar said. He was later arrested at the scene for an outstanding warrant out of Sacramento County on a marijuana-related charge, Lazar said.

Update 2: Comstock Saloon says they hope to reopen as soon as Thursday. [Eater] 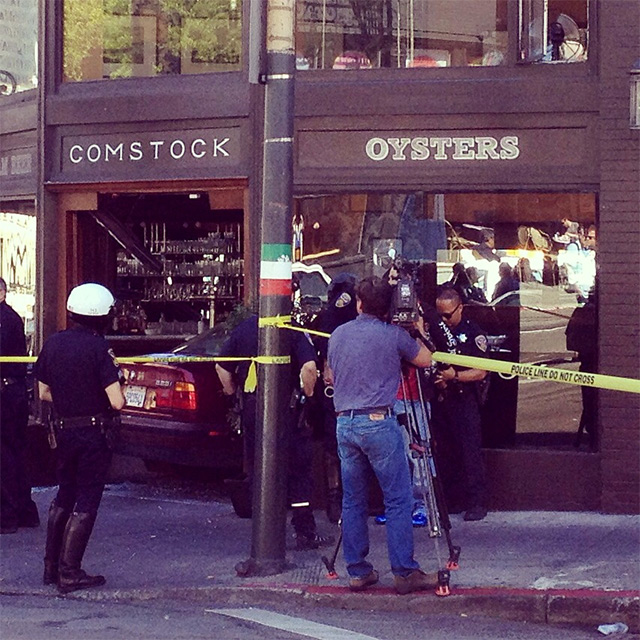 KitTea, San Francisco's first cat cafe set to open at 96 Gough Street in Hayes Valley as we previously reported, has revealed a first look at its layout via Facebook. Created by Shift

Though I reiterate my disagreement with the decision to name La Taqueria not only the best burrito-maker in the Mission but in the nation, the resulting buzz has been a boon for business.