A group of space enthusiasts in Mountain View, California, with cooperation from NASA, have taken control of a 36-year-old decommissioned satellite that was originally put into orbit to study solar weather. The ISEE-3 satellite was launched by NASA in 1978 and has not been in use for about 20 years  its battery died decades ago, but it was equipped with solar power and it just returned to Earth's orbit after many years floating in space and being forgotten. Now, as BetaBeat reports, via some crowdfunding and an industrious team led by former NASA employee Keith Cowing, the ISEE-3 has become the first civilian-controlled satellite which will continue to beam publicly accessible data of multiple kinds for the next several decades.

The ISEE-3 Reboot Project, which raised well over its $125,000 goal, now has a control center in an abandoned McDonald's in Mountain View near the Ames Research Center, which the team has named McMoon's. Google helped them build a website called SpaceForAll.com which shows off some of the capabilities of Google Chrome, and Cowing helped assemble the simple, relatively low-tech equipment needed for communicating with and controlling the satellite.

He also had some help from Bob Farquhar, one of the retired NASA researchers who originally worked on the ISEE-3 and knew that it could probably be brought back to life pretty easily. Getting back into Earth's orbit would turn out to be impossible, though, and they've put it back into orbit around the sun. It'll return to proximity to the Earth in 2029.

Their new control center, dubbed “McMoon’s,” fit all of the criteria they needed: the doors locked, and it was free. For their console, they pulled a broken flatscreen TV from a government dumpster and fixed the power supply. The other pieces are from eBay, including a Mac laptop and some radio parts.

With just those bare-bones pieces, they were able to MacGyver a computer-radio hybrid that made contact with the ISEE-3.

Once they were able to communicate with the satellite, they established a new orbit around the Sun, slightly larger than the Earth’s orbit. It’ll remain close enough to the Earth for a while, allowing the crowd-sourced community to run tests for a long time.

And on Sunday, August 10 at 2:16 a.m EST, the very first Interplanetary Citizen Science Mission took place, collecting data near the Moon with a simultaneous Google Hangout to watch the satellite's progress.

You can now watch a live view of the satellite's location at all times, and check out the data that it's collecting, which will remain accessible to anyone in the world who wants it. And here's an illustration of where the satellite's been over the past 36 years. Below, some video explaining the project. 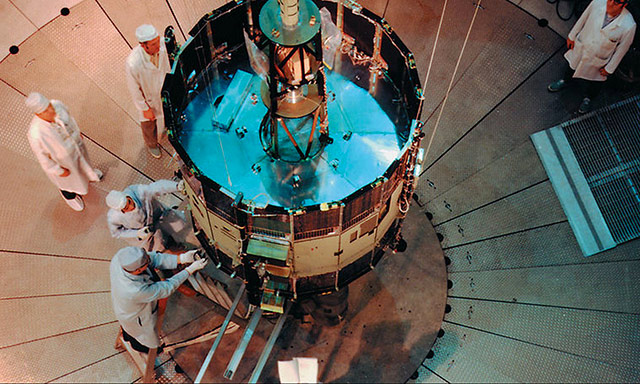 It was clear enough to see last night's supermoon — the second of three this summer — but this shot gives us a close up that a mere glance to the sky can't provide. Also,

What's that about the drought? An allegedly drunk woman piloting a vintage Mercedes crashed into a fire hydrant in Oakland a few days ago, and we have some citizen-uploaded video footage. It was

—
Space Nerds Launch McMoon's, A Control Center In A Defunct McDonald's To Hijack A Decommissioned NASA Satellite
Share this