The corner of Divisadero and Grove, the longtime home to Alouis Auto Radiator at 650 Divisadero Street, will soon be turned into condos and retail spaces. Many NoPa residents are concerned, in particular the building’s next door neighbor The Independent.

As Hoodline reports, at a neighborhood meeting on July 15, plans were revealed for a five-story, 16 unit condo development with three retail or restaurant spaces, which will replace the current auto shop’s garage doors and face Divisadero (check out a rendering below).

The Mission Revival style building was constructed in 1922 and been a family-owned auto shop since 1952. Though the back of the auto shop’s warehouse will be demolished to create space for the condos, the aesthetics of the 1920s exterior will remain. The architect tapped for the project, Warner H. Schmalz of Forum Design, said he’ll reference the building’s early look, before it turned into Alouis Auto Radiator. The building is not part of the city’s Historic Preservation program.

Plans call for the building to have 12, 2+ bedroom units, ranging from 1,000-4,000 square feet and four, 1-bedroom apartments at 900 square feet, plus outdoor patios and an underground parking garage with 16 spots. Through a proposed zoning change, according to SocketSite, the developer is adding a roof deck.

One of the primary issues that neighbors have with the project is the building’s proposed 55 feet height, which will alter the skyline of Divisadero and block views for residents on Grove Street.

Next door music venue, The Independent, which has been hosting loud rock shows for more than 60 years, is — no surprise — concerned about noise complaints. The condo’s rear units will only be 55 feet away from the venue and residents using the patios will almost guaranteed be affected.

One of The Independent's owners, Michael O’Connor, faced similar issues at his Mission venue Brick & Mortar Music Hall, which at one point in 2013 was nearly shut down due to noise complaints from neighbors. The venue had to install $50,000 worth of additional soundproofing to appease neighbors.

Schmalz said they plan to soundproof the condos based on city standards, but wouldn’t confirm whether new residents would sign paperwork acknowledging that they’ll be living next door to a music venue.

The new building’s plans are in the environmental review stage and will next go to the Planning Department. 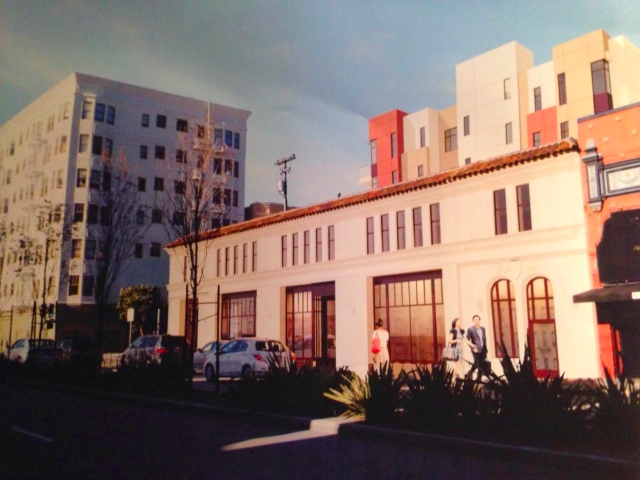 Auto shops seem to be among the hottest properties to turn into condos: The site of Superior Automotive at 3150 16th between Valencia and Guerrero, recently sold for $8.7 million, in a land deal that may have been the highest price ever paid in the city per buildable unit. And the former location of Ed’s Autohaus at 766 Harrison Street in SoMa will soon be a nine-story condo development with 26 residential units.

Via Hoodline, courtesy of Forum Design

Noted local photog The Tens got up close to the facade of Mid-Market's shuttered Merrill's Drugs, which, according to Mister SF, "lost the drugstore wars to Walgreen's and Rite-Aid" and closed a decade

Been feeling a little sticky lately? Weird, right? This week's odd, unseasonal mugginess has prompted some talk of "earthquake weather" on Facebook, and has been the result of a not uncommon "monsoonal flow"