A rich man's $138,000 Maserati GranTurismo plowed into Muni's Potrero Division maintenance facility on the morning of May 20, getting stuck in a trench, and details are now emerging about how this happened. It turns out the car was being driven, poorly and drunkenly, by a 21-year-old intern from Dallas who had borrowed it for the evening with his boss's permission. Little did the boss know the kid was going to be out drinking all night and tooling around in the car 90 minutes after last call.

As SF Weekly reports, per a Muni bulletin, the driver in question came into the maintenance yard at Mariposa and Bryant "at a high rate of speed" around 3:30 a.m., and managed to inadvertently wedge two wheels of the car in a maintenance trench that he obviously didn't see, or didn't expect. Police were called, the kid failed a field sobriety test, and he was booked for misdemeanor DUI.

Apparently, though, accidents like this aren't too uncommon for Muni employees, just not at 3:30 in the morning.

The Ferris Bueller-like scenario surprised veteran Muni hands. They predicted this was the doing of a Muni employee: Agency workers inadvertently maroon their personal vehicles within maintenance pits more often than you'd think while attempting to peer beneath. "You have to line it up just right," says one.

The 21-year-old's DUI case has still not been presented to the DA's office, but should be soon.

Here's guessing he may not have that internship anymore. 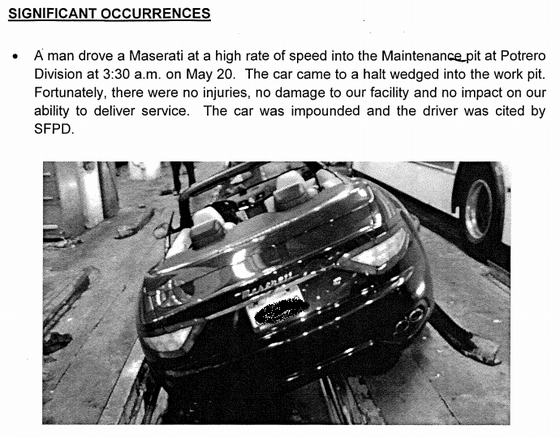 Details on the nine-story condo development that could replace Flax. [Hoodline] Biotech VC based in SF is fired from his own company, sued for fraud. [Xconomy] Merchants want to keep sex workers out

—
21-Year-Old Gets DUI, Much Internet Shame For Crashing Maserati Into Muni Maintenance Yard
Share this