You Sort Of Like Soccer, But Really This Is Just An Excuse To Get Out Of The Office Maybe Have a Few Beers At Lunch
For the nice afternoons, the knowledgeable foodies at the Bold Italic and Tablehopper and SFWeekly all recommend the food truck parking lot and beer garden at SoMa StrEat Food, so expect crowds. Matches will be on a dozen TV's and there are beer and food specials. And because the food truck lineup is always rotating, you can come back multiple times throughout the tournament without having to order fish and chips again.

Update: Also, check out the new, TV-equipped patio in back of Radius in SoMa.

Public House outside AT&T Park will also be showing games, making this the indoor option for SoMa office workers on gloomier June-uary days. Since its still primarily a baseball bar, FIFA will be competing with the MLB for screens here, but it's also an ideal place to catch the Giants and US Men's National Team at the same time.

Closer to Market Street: The Tempest would be a good place to find Chronicle columnists ditching their deadlines and the Chieftan will also be open early for office drones who want to sneak in a half before work.

You Actually Follow Soccer
SFist's own soccer-appreciating ringer recommends Maggie McGarry's in North Beach and McTeague's on Polk. Both are usually home to English Premier League fans so soccer goons will be in good company at either. In the Upper Haight, Kezar Pub will be the go-to spot and will undoubtedly be a bit cramped, although there are so many TV's you won't even have to turn your head.

At the other end of Haight, Kezar's sister pub Mad Dog in the Fog has been topping Best Soccer Bar listicles for as long as anyone can remember, but the roomy interior and postage stamp patio live up to the hype and they'll also be re-showing daytime games in the evenings. If the lines go out the door at Mad Dog, neighborhood blog Hoodline says to try Nickie's a block away or Danny Coyle's down the street.

In the Richmond, try the Blarney Stone or Abbey Tavern. 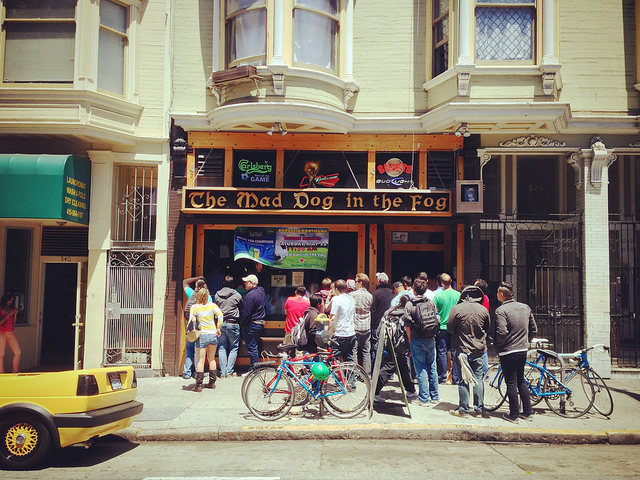 You Still Have Fond Memories Of Little League
Jillian's downtown, the Phoenix in the Mission or Pete's Tavern in SoMa — all of these offer the familiar comforts of a cavernous, womb-like sports bar where you can be free to suckle on Coors Light bottles and potato skins to your heart's content.

You're Just In Town For A Conference
(See above.) 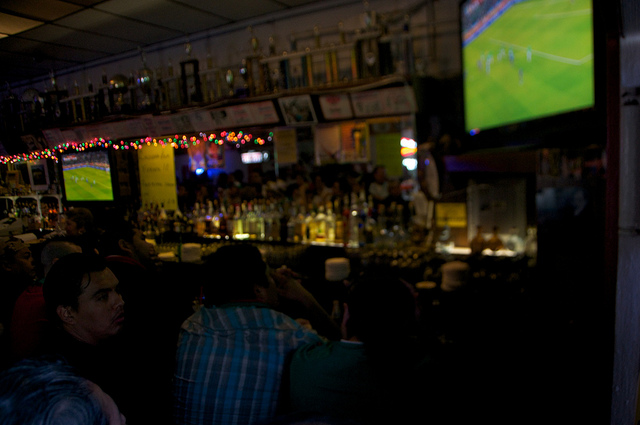 You Want Tacos
Taco and beer aficionados already know that El Farolito Soccer Bar's dining experience is superior to dining in the actual restaurant next door. It's louder, darker and you can order from the bartender. If Farolito is too crowded, Mission Local has made a handy map of other places to watch in the Mission.

You're German
Your countrymen will be at the recently renovated Schroeder's in the Financial District.

You Wish You Were In Brazil
Tablehopper recommends Mina's Brazilian for games, Brazilian food and caipirinhas. 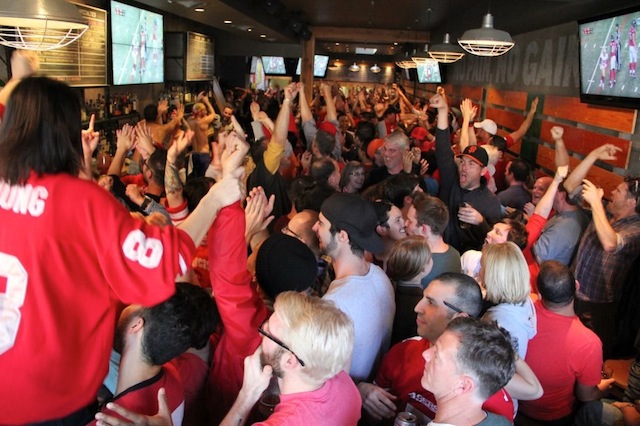 The bar hasn't been around long enough to have lived through a World Cup, but the scene is always welcoming at Hi-Tops.


Your Sports Bar Needs More Castro In It
Hi-Tops. The answer to this will always be Hi-Tops, where you get all the energy of drinking in the Castro with all the camaraderie that comes with a sports bar. It also doesn't hurt that their bar food is some of the best in town.

You're Using This As An Excuse To Try A Bar You've Never Been To
You should go to San Francisco's smallest bar the Black Horse London Pub. It's a treasure, really.

You're In Oakland
The occasional Oakland venturers at the Bold Italic recommend The Parkway Theater near Lake Merritt, where games will be projected on their big screen. Tablehopper, meanwhile, recommends Adesso, where games are accompanied by coffee & breakfast service, aperitivo hour or regular bar hours, depending on kick off time. Fancy.

You're At Home And Don't Have Cable
Deadspin helpfully created this definitive guide to streaming every world cup match live. Order beer and takeout on Postmates and you can watch the games in perfect solitude.

You're Basically Anywhere Else
In 2006, when Italy went all the way, every mom and pop cafe in North Beach had bought a 60-inch flatscreen before the end of the tournament. In 2010, you could catch the game in corner stores in the Lower Haight. Don't be surprised if the games start showing up in random places.

As with the leadup to the Season 3/Coven premiere, there have been just snippets of intel trickling out about the upcoming fourth season of American Horror Story, this one set in Florida

Nope. I don't know what to make of it either. It's kind of like one of those anti-depressant commercials, though, no? [UCB Comedy]

—
Where To Watch The World Cup, According To Everybody
Share this