Twenty years after his suicide (the Seattle Police are holding firm that it was a suicide), Kurt Cobain's case file has been opened up to the public a bit more, and among the items they just released is a note he had folded in his wallet, written on stationary from San Francisco's Phoenix Hotel, mocking Courtney Love and their marriage. The visible portion reads, "Do you Kurt Cobain take Courtney Michelle Love to be your lawful shredded wife, even when she’s a bitch with zits and siphoning all yr money for doping and whoring" As CBS News points out, the undated note stands "in stark contrast to the presumed suicide note, which calls Love a 'goddess... who sweats ambition and empathy.'" 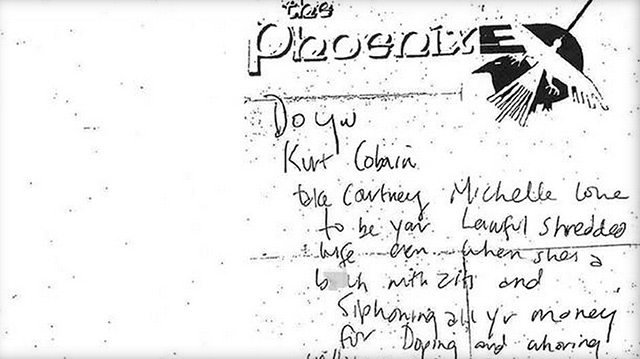 Seattle police also released a bunch of previously unreleased photos from the scene of his death, mostly of the pile of items and paraphernalia that was left next to his body  a cigar box with his heroin kit, a pack of American Spirits, a lighter, his sunglasses, a rag, and his wallet.

The bad Xerox of the note is below, and the bottom of it is cut off so there may have been more.

Nirvana had been on a European tour in the first three months of 1994, prior to his death on April 9. Just prior to taking his life, Cobain had checked out of a rehab facility in L.A. Though it's possible (and one of several biographies could confirm this) that he and Courtney traveled to San Francisco in 1993 on their own (she once lived here), the last time Nirvana performed in S.F. was a full year earlier, in April 1993, at a benefit for Bosnian rape victims at the Cow Palace, and that may have been when this note was written. But why keep it in his wallet?

See the photographs from the scene, in the greenhouse over the garage where he killed himself, here. Don't worry, they're not gruesome, but you can see the suicide note as it was place, on top of a bed of dirt, with a pen stabbed through it.

So far, Courtney has not reacted to the reveal of the insulting note yet on Twitter. Which is kind of unlike her. 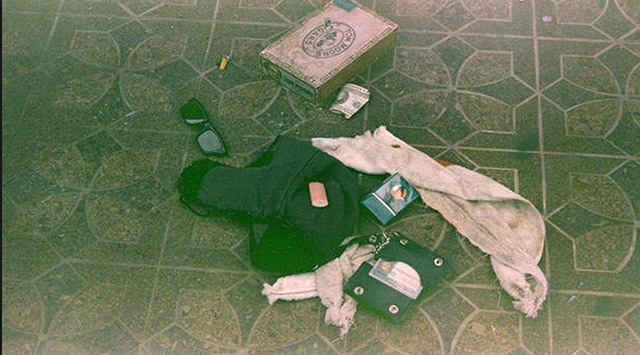 * This post has been corrected to show that Nirvana had played the Cow Palace in San Francisco one time before 1993, along with the Red Hot Chili Peppers and Pearl Jam, on New Year's Eve in 1991.

Maggotgate 2014 continues today, and KRON4 will not rest until every last larvae has been eliminated from the Noe Valley Whole Foods. According to KRON4, San Francisco's finest source of bad behavior and

Fisherman's Wharf fixture Dan Sandler, a.k.a. Evil Elmo, is back! He's making headlines again just six weeks after a pair of Chronicle pieces in which we learned of a recent scuffle