This new map of the city by local funny guy Dan Steiner popped up on Curbed yesterday, and much like similar maps that have come before, it's an amusing and semi-offensive look at various landmarks and neighborhood stereotypes. The bonuses here are markers for the "worst Trader Joe's" (Masonic) and the "2nd worst Trader Joe's" (Stonestown) and the "best Safeway" (Diamond Heights, naturally).

See also this judgmental map of New York City, which of course needs to distinguish between the filthy rich, the mega rich, the incredibly rich, and the quite rich of Manhattan.

ADDENDUM
Commenter That Stuff chimes in with this withering response. "I'm tired of these allegedly amusing maps that don't honestly depict what the city is really about. I decided I'd have a crack at a map of San Francisco that I see around me every day. Here you go." 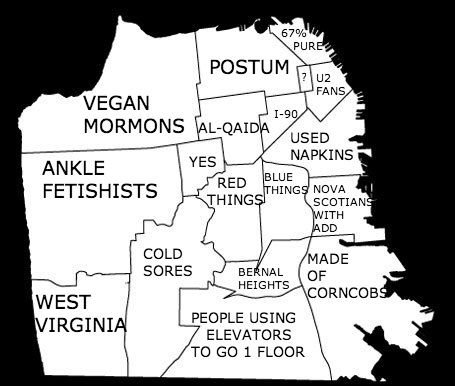 Thursday night at the California Academy of Sciences, the noted scientific institution hosted their annual Big Bang Gala — their largest After Dark event of the year. It's a nerd prom of sorts. A