We're told breakfast is the most important meal of the day, it is also probably the one most often skipped as we rush out the door to catch a Muni bus. Well, put down that limp protein bar, friend, we've got news for you: That bus is delayed anyway and now that you've got an excuse for strolling into work late, you should probably eat something real. Here SFist's staff picks for the best pre-lunch sandwiches, and a couple of burritos for good measure.

The Fried Egg Sandwich Plow
No doubt this place can get ridiculous on weekends, and there are even lines on random weekdays, but should you manage to squeeze your way in, you will fall in love with this simple and perfect breakfast sandwich. It's just two fried eggs, cheddar, aioli, and frisee, with the option of Nueske's bacon. And yes, with the bacon, this is a $13.50 breakfast sandwich, but in a town of $20 burgers and (ahem) $4 toast, you should be used to this. Note that you can't get takeout here on weekends, but on weekdays it's fair game. —Jay Barmann
1299 18th Street at Texas 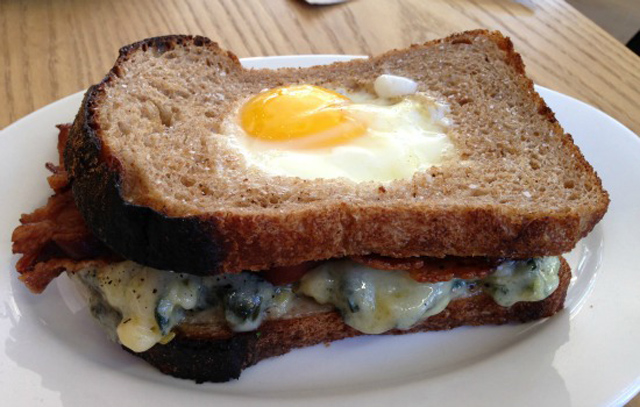 The Egg Sandwich at Reveille Coffee
Now with two locations and a truck in San Francisco, including their newest on 18th Street in the Castro, Reveille serves a limited breakfast menu every day including this awesome sandwich with a toad-in-the-hole on top. It's a hearty, comforting beast, made with dense Della Fattoria levain, thick-cut bacon, gruyere cheese, and a mixture of braised kale and leeks, making it the perfect thing to eat on a foggy morning when a biscotti just isn't going to cut it. —Jay Barmann
200 Columbus Avenue, 4076 18th Street, and the truck is usually parked at 768 Sansome 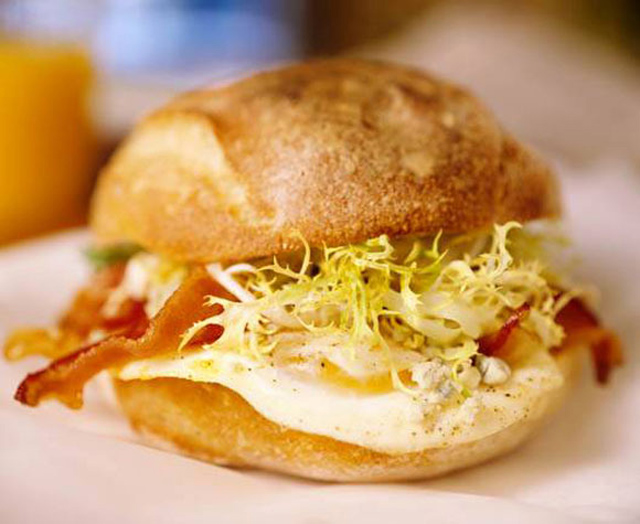 The Fried Egg Sandwich at 'wichcraft
Though the croissant'wich at Tom Colicchio's sandwich chain comes in a close second, I remain a big fan of the simple fried egg sandwich with frisee, bacon, and gorgonzola. The frisee is lightly dressed, as it should be, and it's served on a nice and chewy ciabatta roll. It's a thinking person's breakfast sandwich and not dissimilar from Plow's, but at $7 it's practically a steal. —Jay Barmann
868 Mission Street at 5th

El Bagel Grande at Vinyl Coffee & Wine Bar
Both a hangover staple and a reason to skip lunch, El Bagel Grande is one of those breakfasts for indecisive types: a bagel sandwich with scrambled egg, breakfast sausage, bacon slathered with a healthy schmear of cream cheese and a dash of Tapatio to round things out. It is, more often than not, the manna that allows your associate editor to get any work done before noon. —Andrew Dalton
359 Divisadero Street (at Grove) 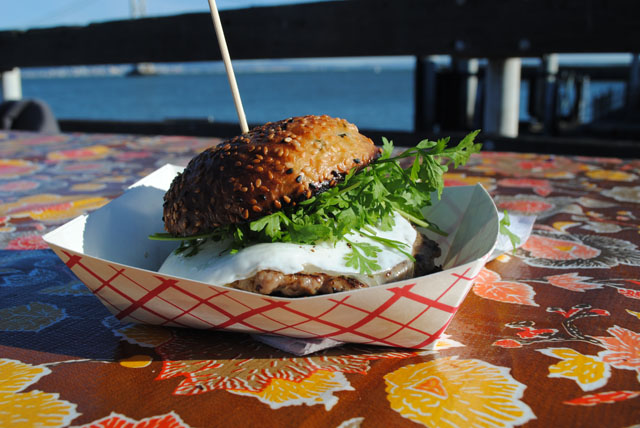 4505 Meats' Maple Bacon Sausage Breakfast Sandwich
The noted meat mongers at 4505 Meats also do for breakfast sandwiches what their Best Damn Cheeseburger did for lunch and dinner: throw together some high-quality ingredients into a simple, but refined version of the sandwich. For breakfast, you get a burger-sized maple bacon sausage patty, a runny fried egg and a pile of seasonal greens all on a seeded and buttered brioche bun.
Thursday and Saturday at the Ferry Building Farmer's Market, Sunday at the Divisadero Farmers Market. 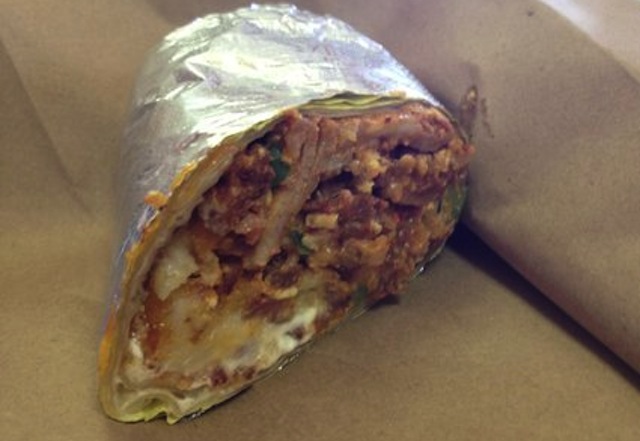 HRD Coffee Shop's Korean Breakfast Burrito
Mornings don't get much better than HRD Coffee Shop's breakfast burrito with the spicy pork kimchi. The noted SoMa/Mission Bay eatery, popular among the South Park tech sect come lunchtime, always has a line out the door, and with good reason. This burrito is one of them. Worth the wait. — Brock Keeling
521A 3rd Street (at Bryant), 415-543-2355 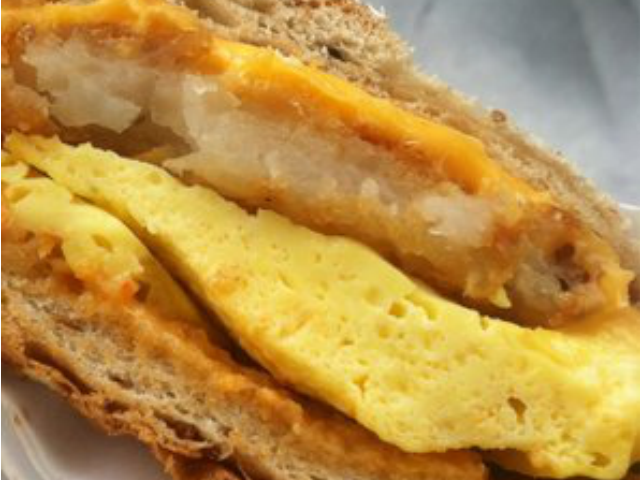 The Original Breakfast Sandwich from Lou's Sandwiches Cafe
Lou's Original Breakfast Sandwich is "officially" bacon, ham (or both), eggs, American cheese, hash browns, and Lou's special sauce, all on a ciabatta roll. Here's what I do: I nix the meat, swap the American for cheddar, and get extra Lou's sauce (which is spicy, salty and delicious). The result is so good that it's dangerous. But with tons of bread, cheese and meat options on their menu, you could enjoy a different, custom version of the sandwich every day for months on end. Find your own danger! —Eve Batey
5017 Geary Blvd at 15th Ave 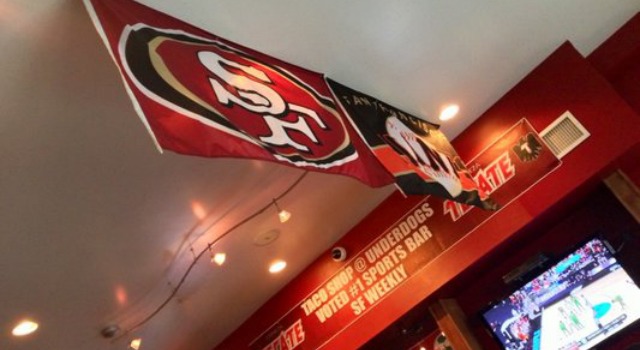 The Taco Shop At Underdogs is a sports bar, but that doesn't mean it's not where you should eat breakfast. Photo: Myke Y./Yelp>/a>

The Santa Fe Breakfast Burrito at The Taco Shop At Underdogs
At least once a week, I beg my husband to bring me one of these as he comes back from the gym (sigh, I know). The Santa Fe is a fantastic mess of scrambled eggs, roasted chiles, cheese, pico de gallo, and distinctly tater totish potatoes in burrito form. If I'm eating there (it's a sports bar, which can be fun or not, depending on how your team is doing) I drip an awful lot of their house salsa on each bite, and if I'm carrying-out, I use the handful of chips they toss in to scoop up any leftovers. At publication time (check your local listings, though) The Taco Shop was serving breakfast every day until 4:30, one of the more generous breakfast windows in the biz. — Eve Batey
1824 Irving, between 19th and 20th Aves 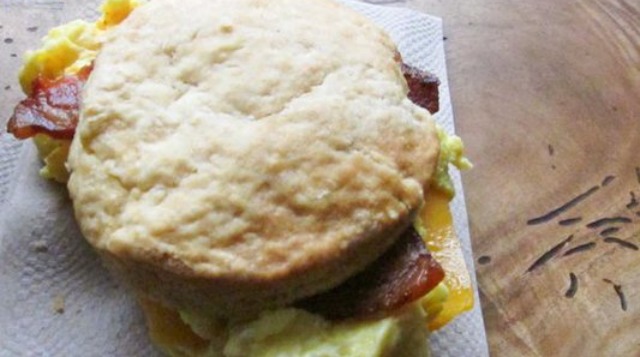 The Breakfast Sandwich at Devil's Teeth Baking Company
In my many years in SF, I've come to realize that the buttermilk biscuits I took for granted in my home state of Indiana aren't as easy as they seemed. I've had a lot of crappy, Southern wannabe biscuits in this town! But not at Devil's Teeth, where two scrambled eggs, cheddar cheese, and applewood smoked bacon rest between two buttermilk biscuits that my Home Ec teacher would have awarded an A to. I don't dig on swine, so when I order their sandwich I do so sans meat, and they usually offer to sub in avocado or tomato. Go with the latter, it cuts through the (delicious, delicious) grease nicely. — Eve Batey
3876 Noriega Street between 45th and 46th Aves

The first full length trailer for the most recent version of Godzilla was unleashed on the internet Tuesday, with predictably breathless results (An apparent 69,400 news reports at publication time, wow). We

Just days after we wondered what despiser of the undomiciled Greg Gopman was up to, we have our answer: he's busy getting sued. Former AngelHack CEO Gopman, as you know, authored a Facebook

—
The Best Breakfast Sandwiches (And Burritos) In San Francisco
Share this