Some good news/bad news about the new eastern half of the Bay Bridge, which we can't stop talking about, we know. First off, the biking/walking path that will take people on a pointless journey to Treasure Island and back will be open along with the rest of the bridge on September 3, but only part of it, meaning you won't even be able to get all the way to Treasure Island on it until later.

The path is cantilevered off to the side of the eastbound traffic lanes, on the right side of the span if you're facing Oakland. Even before the larger bolt problem came to light with the bridge, an issue with the bolts attaching the path's railing came up in May, after crews welded the bolts too tightly causing them to fail if the metal were to expand in warmer weather. This, presumably, has been fixed.

About three quarters of the path will be in place, meaning you'll be able to get up onto the bridge, just onto the suspension part, and then have to turn around and go back to Oakland. The path is 15.5 feet wide, and has three lanes, one for pedestrians, and two for bicycles going either direction. It will only be open from sunrise to sunset for now, and rollerblades, skates, and skateboards are verboten. Once fully complete, the path will be open at all hours. It's accessible via the Bay Trail from Emeryville or from Burma Road and Maritime Street in West Oakland.

This is exciting if only because it's the first time anyone has ever been able to walk or bike on the bridge legally.

Come 2014 (or possibly later, according to the CC Times), you will be able to complete the journey to Treasure Island, after the old eastern span has been demolished and removed. So, the path will not do anyone any good for the Treasure Island Music Festival in October.

Secondly, for some bad news, three of the right-hand lanes heading to the Bay Bridge toll plaza are going to be closed this weekend, starting at 9 p.m. tonight, and they'll reopen Monday, for three days, with a brand new FastTrak lane in place.

Below, a night view of the bike/pedestrian path. 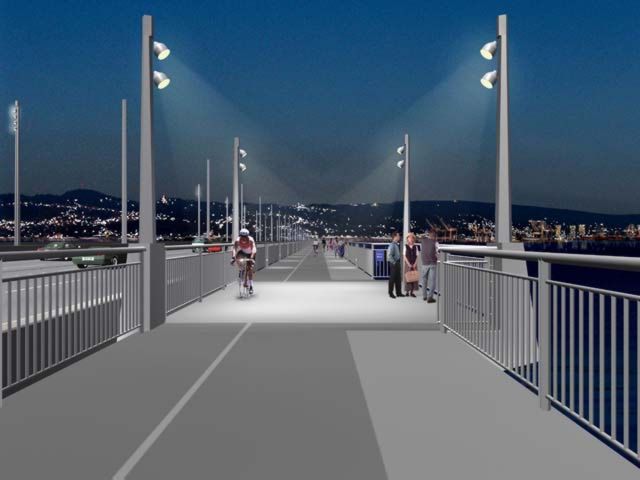 A peaceful UN Plaza moment interrupted by SFPD, as seen by Troy Holden.

Check out this additional shot of the MTV Real World S.F. house on Sutter Streer, this one featuring the living room. Here we see a pool table (would it be a Real

—
Bay Bridge Bike/Walk Path Will Open Too, Sort Of; Three Toll Lanes Will Be Closed This Weekend
Share this