A truly disturbing low in the Era of Facebook today: A Miami man allegedly shot his wife this morning and immediately posted a confession on Facebook, followed by a photo of her bloodied body slumped on what looks like the kitchen floor. And it took 5 hours for Facebook to pull it down.

Granted, media just picked up on the story in the last couple of hours, but the photo had been shared about 200 times and had several confused comments from friends before his profile and timeline were disabled.

We in fact saw it before it was pulled, and the Daily News posted a blurred out version here.

The man's name is Derek Medina, and just yesterday afternoon he had posted a happy looking photo of himself out with his family (right). He had been married to his wife, Jennifer Alfonso, for about a year and a half, according to CBS Miami. Their 10-year-old daughter was in the house at the time of the shooting, apparently, but was unharmed.

In his confession post he wrote that his wife was "punching" him (see it below). Medina turned himself in to police this morning saying that he and his wife had had a domestic dispute, and he shot her.

What would possess a person to post a photo of a spouse they shot for the world, and their friends and family, to see, is beyond us. But needless to say, this is the world we now live in, wherein everyone posts everything, all the time. We are going to wash our eyes out now. 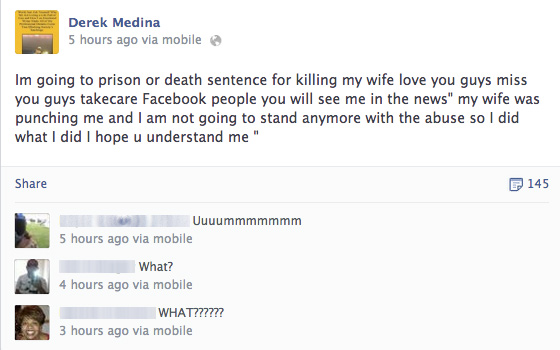 The Facebook murder pic and Oakland shootings, just to name two stories, have proven to be too much today. Harrowing, depressing, common. So with that, here's a video of a perfectly fat cat

Davey Wavey, the vlogger who brought us this swell look into the sex lives of LGBT senior citizens, and this montage of thoughts about vaginas by gay men, presents us with a new