As the Internet's reviews site of record, Yelp has amassed mountains of data on which restaurants have terrible parking and which users had terrible dates. Today, the company released a new map visualization tool that lets us see exactly which neighborhoods Yelpers find "sketchy," "frat" or "hipster." And the results may not surprise you.

First up, Yelp's "sketchy" map, which glows red for hotspots where reviews frequently mention the word "sketchy." A big fat blotch in the Tenderloin, with a few other shady stains near the 16th Street BART station, Broadway and Columbus, and a few pinkish spots around 24th Street BART and Fillmore south of Geary Boulevard.

Should you wish to avoid those sketchy spots for something a little more hip, Yelp has a visualization for "hipster" as well. We're not really sure if "hipster" is meant in the derogatory sense here, but you can apparently find those types roaming (where else?) the streets of the Mission, pretty much everywhere from Dolores to South Van Ness and from Market Street to 25th Street.

If the Mission's hipster density becomes too much for you to handle, you can find smaller pockets along Divisadero or Polk Street, in the Haights and Hayes Valley, or in one lone outpost of hipness in the Outer Sunset where you'll find Outerlands, Trouble Coffee and also drugs. 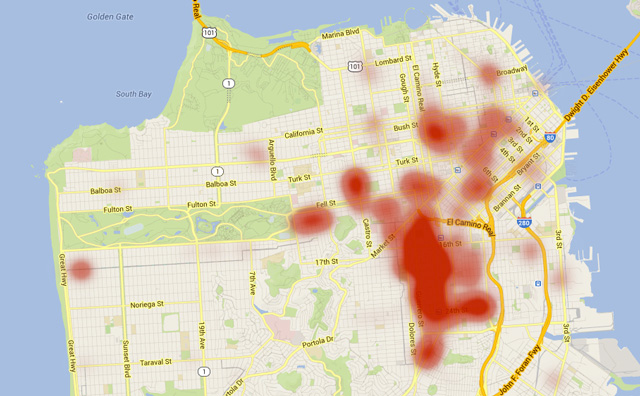 Interestingly, the "hipster" map doesn't necessarily correlate to the availability of PBR.

Luckily for everyone who was happy to move on from college when they arrived in San Francisco, the "frat" scene is fairly limited: Union Street in the Marina, along Columbus in North Beach and a couple of hotspots on Polk Street where Marina graduates go to drink away the remainder of their twenties. 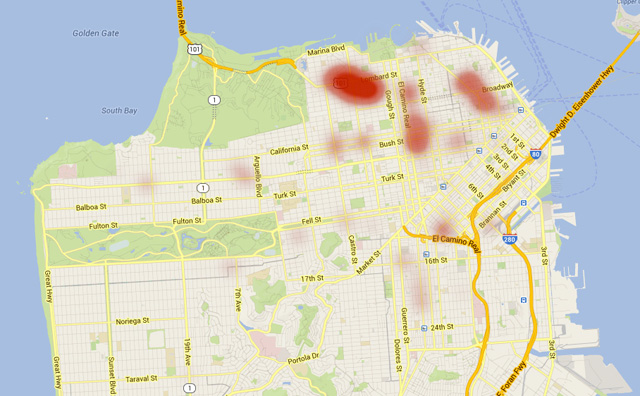 After several outlets reported earlier that there were no plans to schedule new negotiations between BART officials and the two unions currently on strike, a spokesman for the transit agency has said that

Coffee. Suffice it to say we are a town obsessed. And though it may not boast the hip-kid-approved venues of Ritual, Four Barrel, or The Mill, or the even bougier Sightglass or Blue