Photographer Joe Blum, a former shipfitter and welder himself, has spent the last 24 years documenting the rise of the new Eastern Span of the San Francisco-Oakland Bay Bridge. From the first soil samples to the top of the new tower, Blum has shot more than 25,000 photos of the project from the perspective of "the worker in the midst of his or her labor."

Blum says of his work: "In so far as possible, I have attempted to photograph the building of this bridge from their perspective and I think that the public should get to see their work from that point of view and hopefully honor and celebrate it, as I do." This summer, before the new span official opens in September, the San Francisco Arts Commission Galleries will finally put Blum's work on display in an open show at San Francisco City Hall that runs from June until the end of September. Of Blum's work, the SFAC writes:

Arresting height and gargantuan scale assault the viewer in images that often seem inconceivable. Blum's images capture the sheer physicality necessary to work in the midst of rebar cages and tower cranes. Men and women are documented in rapt attention as they leverage their weight against steel and concrete, muscles taught and eyes focused. The photographer has infused each of his photographs of the Bridge's laborers with distinct nobility. It's clear from the artist's treatment of his subjects that these individuals are an imperative piece of the project's puzzle. Blum states, "There would not be a bridge without the men and women who are building it. They are the ones who have transformed the ideas of the bridge designers, architects and engineers from blueprints and drawings into a living structure of steel and concrete."

Most of Blum's photos (70 of which will be on display) were shot on 35mm film and a large-format Pentax camera, so infrastructure fetishists will have to wait until the opening reception on Thursday, June 6th to see them all. Until then we have these two dizzying shots to hold us over. 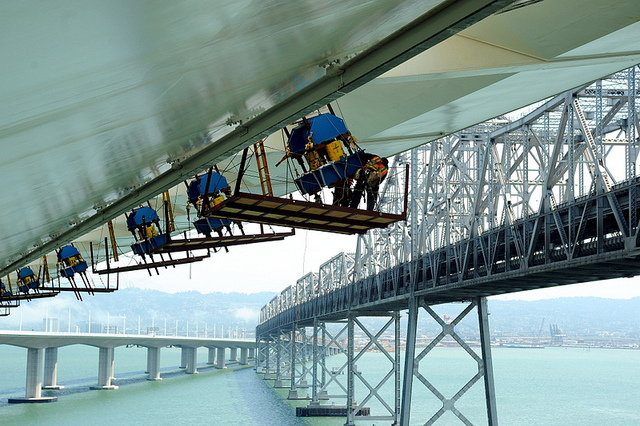 St. Patty’s Day weekend is upon us, and what kinds of friends would we be if we didn’t help you blackout this weekend? You could start tonight at RN74 where Happy

24th Street watchdog Uptown Almanac alerts us to a statement made by Supervisor David Campos last week with regard to the sale of small liquor bottles (pints and half-pints and such), and single