Some jerks in the Mission spent the night pretending to care about the Giants, while attention-grabbingly setting things on fire (reactions from once respectable occupiers, who littered the Mission after the game, also bordered on disgraceful/painful to watch). But the Castro showed that the best kind of party is a beautiful party, one filled with air-catching accents billowing in the wind. Giants fans in the area laced the top of Muni lines with toilet paper, resulting in a stunning and nonviolent effect.

Not to be outdone, however, fans in the Lower Haight also took to throwing TP atop bus lines, with dramatic results. Behold: 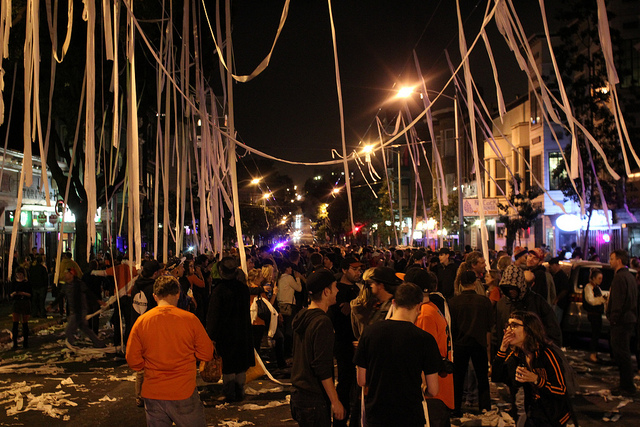 Photog saucemeisterq took this shot of the scene in the Lower Haight after the Giants swept the World Series.

Several separate shootings occurred in Oakland within a seven-hour span on Sunday night. Out of those bouts of gunfire, three were wounded and one was killed. "The fatal shooting happened about 10:30

Joining such neighboring businesses as Happy Donut, McDonald's, Zeke's, and SFist headquarters, exemplary two-star Michelin joint Saison will pack up its belongings in the Mission and move to eastern SOMA by mid-December of

—
The Castro, Lower Haight Beat the Mission When It Came To World Series Revelry
Share this