Preservation Hall West, an expansion of the historic New Orleans Jazz hall, will become San Francisco's (and the Mission's) newest music venue when it opens its doors just in time for the annual parade of talent that comes to town for the Hardly Strictly Bluegrass Festival — starting with the club's titular Preservation Hall Jazz Band appearing for their 50th Anniversary celebration with Robert Earl Keen on Thursday, October 4th.

The club, which has been under construction in the former New College space at 777 Valencia Street since 2011 and will eventually include two full-service restaurants in addition to the concert venue, is under a somewhat ambitious deadline to clean up the place in the next two weeks. SFist pal TK first noticed the TicketFly sales for the early October concerts, noting the tight turnaround for the club that just got additional square footage approved by the Planning Commission back in July. As one commenter on TK's blog and other Valencia Street neighbors at Mission Mission point out today, the venue doesn't appear to have gotten very far past the plywood stage yet.

Anyhow, this will be one to watch when the doors do officially open — if they make it in time for Elvis Costello's two $150-per-head benefit events with the Preservation Hall Jazz Band on October 6th. Once Hardly Strictly clears out of town, it looks like the venue also has at least one neighborhood-friendly, $15 show with Woods and White Fence lined up for October 17th.

And one parting rendering of the final product from the Planning Department: 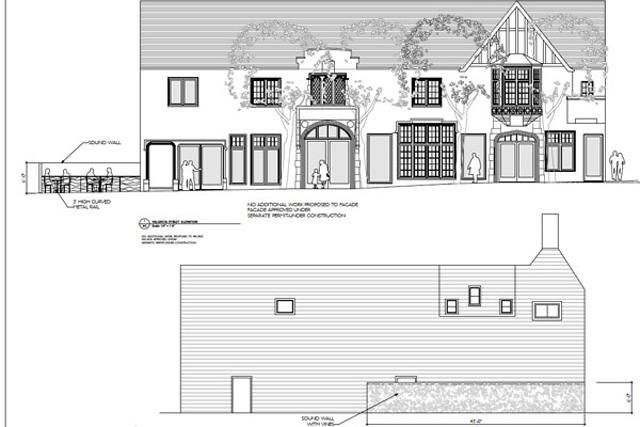 Eagle Tavern, the SOMA staple that fell under controversy after the city got wind that its new owners might not be into man-on-man action, is now back in the hands of LGBT ilk.

Maverick first brought you their now famous junk food and wine pairing dinners (which SFist told you about in May). Now they're taking a not so controversial, yet just as sublime, route by