Much has been written about how Steve Jobs returned to Apple in 1997 and turned the troubled company into one of the most valuable in the world—but sometimes a t-shirt just says it better. Because before we could get an iPod, iPhone or iPad, some housecleaning had to be done. And to that end, we have yet to see a shirt that better sums up how Jobs immediately went about fixing the company he co-founded than the one you see before you. A year after this shirt was handed out to a few Mac OS faithful in Boston, Jobs started going about axing every single thing this shirt represented. Shall we count the ways?

Killing The Clones: Back when the Apple's name went hand in hand with the word "beleaguered" it tried its hand at the Windows model of licensing its OS out to other companies. And for awhile Power Computer was the most successful of the bunch, eventually hitting revenues of $400 million a year. One of the first things Jobs did upon his return? Kill the licensing program and buy Power Computing in Apple stock.

Making Peace With Intel: The actual slogan that PC had Sluggo saying to try and rally the troops was not "We're Fighting Back For the Mac," it was "Let's Kick Intel's Ass!" But for various reasons that was too risque for a shirt. And it didn't work anyway! Though in 1996 Macs ran on PowerPC chips from Motorola and IBM, quickly after Jobs and his NeXT team arrived a program was set up to port the next generation Mac OS based on NeXT Step (now known as OS X) to Intel chips. It wasn't until 2005, however, when the transition was officially announced to the public.

Stopping The Spec Wars: Lots of things changed about the computer industry when Jobs came back to Apple, but one of the biggest was the disregard for specs. At the time of this shirt, that 225 Mhz speed barrier was a big deal for a Mac to cross. Now, thanks to an emphasis on the new (see: the latest iPad being named simply "the new iPad") most people don't even know how much memory they have in their iPod. 10,000 songs is not a real metric. 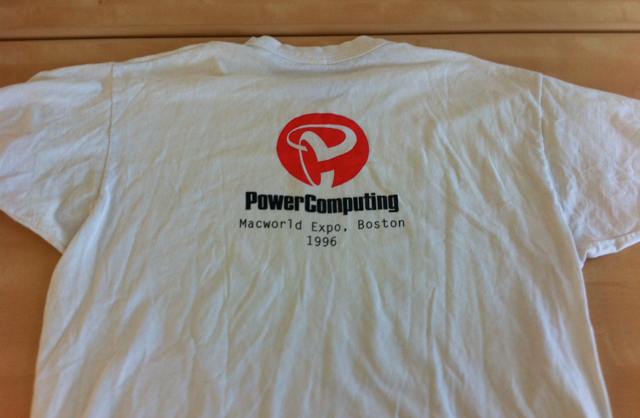 Expelling The Expos: Back in the day there were only so many places for Mac fans to gather both online and off, which made the Macworld Expos in Boston, SF and Tokyo incredibly important (this was long before there was a Daring Fireball and its ilk, when some of us were constantly refreshing the Apple-as-soap-opera blog As The Apple Turns for our daily fix). But Steve Jobs wasn't a fan. Though he definitely grasped the importance of the keynotes there, he didn't like being tied down to someone else's events for his announcements. In 1997 the Boston Macworld Expo was where Jobs announced a cash-infusion from archrival Microsoft (to boos) and that was pretty much it. The show moved to New York the next year, did a few years here and then, without Apple participating, had a few lackluster appearances in Boston before giving up the ghost in 2005.

Branding The Apple The strangest thing about this shirt? That neither the word Apple, or the company's famous rainbow logo (later made monochromatic by Jobs) is anywhere near it. Yes, it wasn't an Apple shirt, but that was exactly the point. At the time Power Computer was arguably making the best Apple computers out there (even if yeah, they weren't Apple computers) and here was that company putting out shirts with an IBM logo! One of the first things Jobs did upon his return was introduce the the "Think Different" ad campaign and bring the focus back on Apple the company.

Yes, in his return to Apple Jobs oversaw a major developments—but to get there he and his team first had to clean the company up. And if you could put that cleanup's roadmap on one shirt? This would be it.

From the back (Garth Johnston / Gothamist)

At least one home is destroyed and several others were damaged when a suspicious four-alarm fire broke out around 3 a.m. Tuesday morning in the Bayview. According to police, two women in

Police responded to corner of Third Street and Newcomb Avenue a little before 4 a.m. Tuesday morning after receiving a call about a shooting. There they discovered an unidentified man had, in