What looked like a relatively peaceful scene in Oakland in the evening escalated around 8:30 p.m. Tuesday night as Oakland Police and Alameda Sheriff's deputies gave a dispersal order to protesters gathered at 14th and Broadway. At least one news outlet is currently reporting tear gas and flash bangs have been deployed, although that is still unconfirmed.

Justin Beck is, once again, on the scene with a live stream (embedded below), and we'll continue updating as we know more.

OPD have Public Information Officers on the ground, clearly marked with armbands making information available for reporters on the scene, which Beck notes is a change from earlier Occupy Oakland activity.

9:15 p.m. A few trash cans were set on fire before authorities moved in to disperse crowds. Although we still don't have any confirmation that flash bangs or tear gas were deployed. Chronicle reporter Vivian Ho and several other sources on the ground are reporting that many of the protesters have been dispersed, at least in some sections of downtown Oakland. 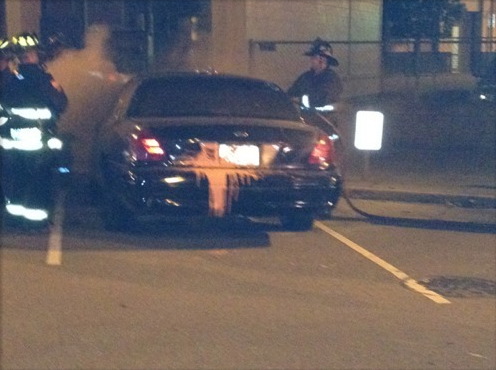 10:30 p.m. Police put out another dispersal order, according to our friends at the East Bay Express. The dispersal order was followed by what some were calling "a show of force" — essentially all of OPD and the mutual aid agencies from Alameda, Fremont and elsewhere were blaring sirens revving the engines on their police motorcycles with the goal of dispersing remaining protesters that regrouped near Frank Ogawa Plaza. Susie Cagle also reports targeted arrests have begun at 17th and Broadway.

Jeez. According to @abc7newsbayarea, this officer (one of several) was drenched in a substance believed to be yellow paint during today's May Day protest in Oakland. As SFist reported earlier that paint was

After a day of shutting down traffic in the Mission some members of Occupy SF have returned to 888 Turk Street, which the group occupied in protest on April 1st. Although the occupation

—
Live: Protesters Square Off With Police In Oakland [Updates]
Share this