Although his gastronomic reputation has, let's fact it, been marred due to his frozen food and canned soup lines, Spago founder and chef Wolfgang Puck still has some pull. So, he penned an open letter to California restaurants still serving foie gras. And the letter, sent by Puck in February, was intended to sooth the frayed nerves of chefs who don't like being told what they can and cannot serve at their spoons. (As you know, foie gras will be banned at the start of July this year.) Vegansaurus' wonderful Laura Beck (by way of SF Weekly) got her hot hands on the letter. Check it: 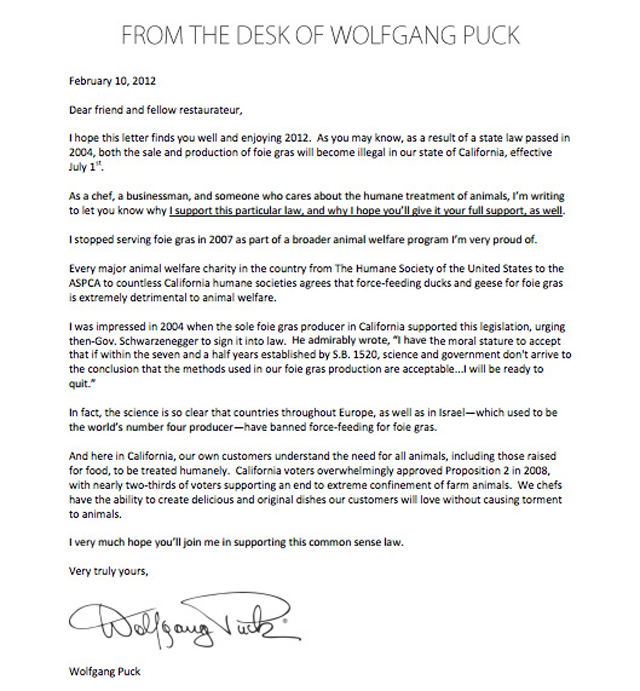 While Puck is against serving the fattened duck or goose liver, he does still continue to serve animals. Beck points out:

Of course, Puck still serves all other kinds of animals on his menus. He's included in a wave of restauranteurs who participate in "Meatless Monday" and is clearly thoughtful about where his food comes from, which is distinctly California. And, more specifically, San Francisco. After all, we already have an delicious animal-friendly foie gras on the market. Perhaps Puck will soon be serving that?

The foie gras ban, which initially provoked some interesting discussion regarding animal rights and the rights of diners, has dissolved into (if we may borrow a term from People's Court's Marilyn Milian) a round of ¿quien es mas macho? among local chefs. Russell Jackson of Lafitte hosted an aggressively all-foie gras dinner last October. And Bay Wolf in Oakland had a "Farewell to Foie Gras" blowout dinner on Sunday, which was met with protesters.

Did you know that there was fracking going on in hundreds of locations around California, including some in nearby Monterey County? Well, there is, and a new report just came out about it,

A perturbed frenchman, caught peeing in his garden by Google's popular Street View feature, is suing the company for humiliation and invasion of privacy. The photo, posted online, has reportedly made him the