ACT UP (AIDS Coalition to Unleash Power) did more than just unleash a cutoff jeans, t-shirt, and black leather jacket with boots fad. It started a revolution. In March, the organization turns 25. Local activist Michael Petrelis, who was/is a part of the action, notes: "It was on that date in 1987 that my old friend Larry Kramer gave a speech at the gay community center in New York City, and that meeting is recognized as the first meeting of what was to become ACT UP."

And here's the flyer that announced the very first ACT UP demonstration, complete with amends by Kramer. 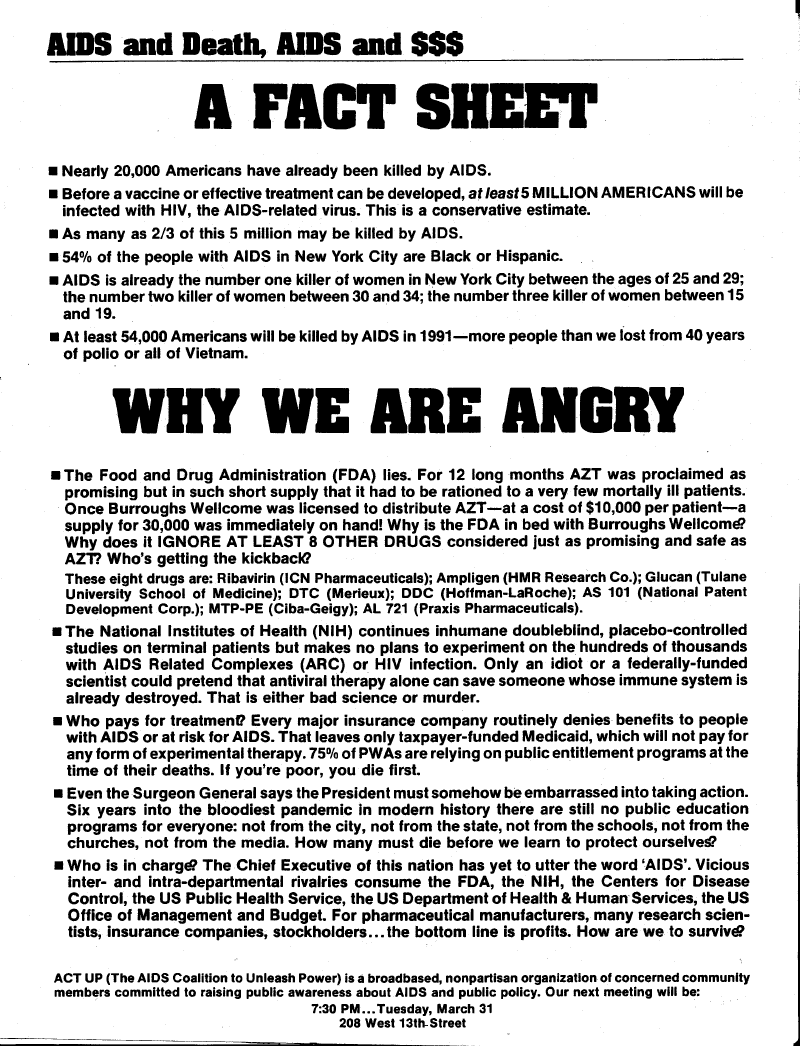 Petrelis goes on to report more about the group's demands and why the word "gay" was intentionally omitted:

The flyer otherwise lists what were at the time considered very radical demands - quicker drug approval, revamping clinical trials, affordable treatments, massive public eduction, political leadership, an end to discrimination against people with AIDS - and many of the things we wanted came about, through targeted anger and activism.

Quite interesting that the word "gay" is omitted from the flyer, I imagine, because AIDS was seen by many average folks and the mainstream media as a "gay disease" and part of our agenda was to define AIDS as an infection that struck gay and straight people. A virus knows no morals or sexual orientations.

In 2000, ACT UP/Golden Gate changed its name to Survive AIDS in an effort to avoid confusion with ACT UP/San Francisco (ACT UP/SF). "The two had previously split apart in 1990, but continued to share the same essential philosophy," notes Wikipedia.

From way out in Forest Knolls (which, like Sherwood Forest, is one of those fairytale neighborhoods that sounds like it was named by six-year-olds) we learn of a new candidate running for the

Today, February 22, is National Margarita Day, one of the most sacred days for Marina cougars and Jimmy Buffett fanboys living in Sausalito. While San Francisco's artisan bar scene desperately wants to make