Police asked residents, if you will, of the tiny tent town outside the Federal Reserve Bank at 101 Market Street to scatter last night. The shantytown occupying the area was built in support of Occupy Wall Street. According to the Examiner, "police forced the protesters to take down their camp, saying that while they have a right to demonstrate they cannot block sidewalks with items such as tents, crates and other objects."

One arrest was made.

However, Occupy SF tells a different story. One that has cops crying, it seems, because they want to join the local honey-loving movement.

"Last night the SFPD issued us an unsigned, undated notice that declared we had to pack up our tents without giving us a timeline or else we would risk arrest.They said that we could remain occupying if we pulled down our tents and complied with their other demands. We complied with their demands by taking down our tents and beginning to clear-out the rest of our infrastructure that was allegedly in violation of City and/or State laws. We made a call to action. Our numbers doubled within half an hour. Occupy Oakland, along with many others, immediately responded when we announced that the cops were here to take us down. Thank you Occupy Oakland and all others!

Yet still, the police, wearing helmets and carrying batons, formed a perimeter around our goods and prevented us from saving anything while they supervised Public Works employees as they stole everything. Occupy SF and Occupy Oakland surrounded the police cars and Public Works trucks to prevent them from leaving. There, we sang This Land is Our Land and We Will Not Be Moved. The police stole food, water, shelter, and other necessities of life from the 99% at Occupy SF. They kidnapped one of our friends. Officer Pascua (#4014) said to multiple occupiers that '[He] I can't wait to get the chance to bust your face in.' Another officer struck a woman last night. Let's hold him accountable. We saw multiples officers with tears rolling down their cheeks. We could tell that they wanted to join us."

Mayoral candidate John Avalos came out to defend the group, acting as a liaison between protesters and police officers. The takedown started at around 10:30 p.m. and ended at roughly 2:30 a.m.

Yael Chanoff, who was at the encampment on behalf of the San Francisco Bay Guardian, phoned in to report that police officers had issued notices telling people that they had to clear out because they were in violation of local city ordinances such as public nuisance laws, rules requiring permits for temporary structures, and the newly adopted sit/lie ordinance. Officers were taking photographs of the camp, presumably for evidence. Trucks from the city's Department of Public Works had lined up on the street, she said. Roughly 50 police officers in standard uniform were there, carrying "stacks of zip ties," she added. Alexander List, a protester, said that a commanding officer on the scene had told her no one would be arrested if the structures were removed completely within 30 minutes. Chanoff estimated that there were about 20 structures.

According to the following, SFPD cited use of an open flame on sidewalk or city street, disorderly conduct, public nuisance health code violation, preparing food without a permit, lack of permit for sidewalk occupation, and civil sidewalk violations.

As of thursday morning, the sidewalks at 101 Market appear more or less clear, save for a slew of SPPD vehicles monitoring the area. Although they removed the tent city, authorities have allowed Occupy SF to stay. Here's a shot taken near the former encampment area at 10:15 a.m. Thursday. 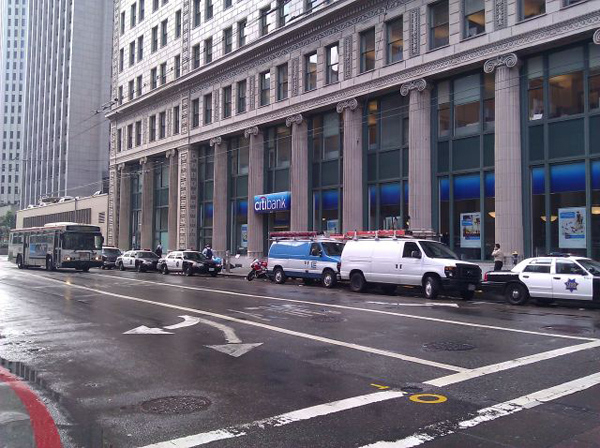 There's nothing like waking up slightly hungover from a friend's mid-week birthday, your eyes oddly sticky and glossed over  what's this? You left your contacts in. Gross  to sit by the window drinking