Take this one with a dotcom bubble-sized grain of salt: various sources are reporting that Sean Parker and Shawn Fanning (yes, the same gentlemen who brought you the original Napster) are planning a secret concert in San Francisco tonight featuring Snoop Dogg, The Killers, Jane's Addiction and Kaskade to celebrate the launch of their new video streaming startup called Airtime.

Over at Now! 99.7 ("All the hits!"), the radio station has posted photos from outside the supposed venue, although they haven't actually divulged the location at 1401 16th Street. Still, it's painted to look like one large graffiti explosion, so it would be pretty hard to miss if you happened to be walking by. (We're by no means experts of graffiti artists and their handwriting, but it does look a lot like Barry McGee's handiwork.)

So what do you say, dialed-in dotcom readers? Are we looking at a private concert the likes of which San Francisco hasn't seen since Pets.com went under? Or is this just a rumor and some street art photos?

UPDATE: Here we go: AllFacebook.com got their hands on an invite to the Parker-hosted post-conference happy hour party and concert. The venue in question is 1401 16th Street in SoMa/Potrero Hill. You could try your hand at RSVPing to [email protected], but that "Invite is Non-Transferable" line is a little bit foreboding. If you sneak in through an air vent or something (not that we'd encourage that), please do let us know. 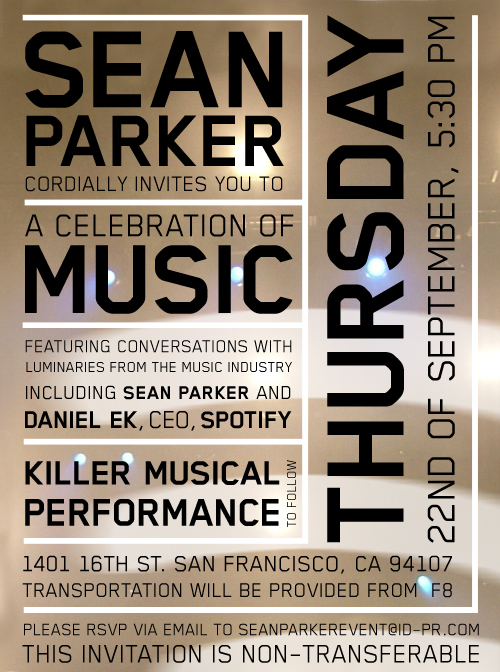 Umami Burger, the SoCal mini-chain of gourmet hamburger joints preferred by carnivorous Angelenos and scores of hungry celebrities, is finally ready to open their first, much-anticipated Bay Area location early next month. Although