This week, Willie eats crow while continuing to feed his obsession with where the real San Franciscans dine. He also dishes on New York's Governor, reviews a movie made for children, gives Nat Ford a proper sendoff and heartily endorses the Justin Herman Plaza zipline.

Willie's week in food started off by dining at Harris' Steakhouse with John Madden. Can you imagine being a piece of meat stuck between Willie Brown and John Madden? It's best not to think about it really. But speaking of pieces of meat: the two men's topic of discussion was New York Governor Andrew Cuomo. Madden really wants Cuomo to run for president so he can "return the favor" - we think that has something to do with money. Hard to say, really.

On another night out, Willie was feeling indecisive. He started at North Beach Restaurant, where he likes to meet his cronies for schemey power dinners, but quickly moved on to Ozumo where it was apparent that the SoMa crowd was "too noisy, too crowded and too young." After popping in to Boulevard (a more "adult" place), he scooted over to the Hotel Vitale where there wasn't a single resident of Antioch to be found. Willie can tell Vitale's clientele aren't from the suburbs because everyone was walking. People don't walk in the suburbs, duh. (Because they're fat.)

Regarding that aforementioned crow: it was actually a pigeon. Technically they call it squab when it's on the menu instead of on the street, but the point remains the same: Willie ate it and then told us about it. It was minced and served protein-style in a lettuce leaf wrap at Tommy Toy's. And that wasn't the only foul dish he had at Tommy Toy's: he also got the Peking Duck as one of his three entrees. Also: he had three entrees.

After a limp description of his dessert ("usually a soft pudding of sorts with some sort of sauce piped on the plate"), Willie sneaks in a triple-play commercial for Gary Danko, Michael Mina and Quince. The price at Tommy Toy's is about on par with what you'd pay at those joints, just not if you're Willie. Those namedrops alone surely got him a couple of free meals at the very least.

For Nat Ford's big goodbye party at Muni HQ, Ed Lee named July 7th, 2011 Nathaniel P. Ford Sr. Day in San Francisco while Willie emceed the event. City Insider reports that everyone who attended was asked to kick in 20 bucks to cover the catered meal of chicken, veggies and fruit kebabs. Which means Willie must have been especially miserable because if there is one thing Willie hates more than banquet food, it's paying for stuff.

In movie reviews, Willie caught a matinee of Cars 2, which he says is "absolutely worth seeing... at least once you get through all the Disney commercial tie-in junk that comes on before the movie starts." That's the total opposite of Willie's weekly ramblings which still aren't worth the effort after you throw out all of the blatant namedropping and product placement.

And speaking of product placement: Willie told the press he would ride the Justin Herman plaza zipline "all day" if the company would let him. At $29 bucks a zip, we're fairly certain Ziptrek would let him. He could use it to zip from Sens to Boulevard in no time flat. We're pretty sure Boulevard's already got his table ready. 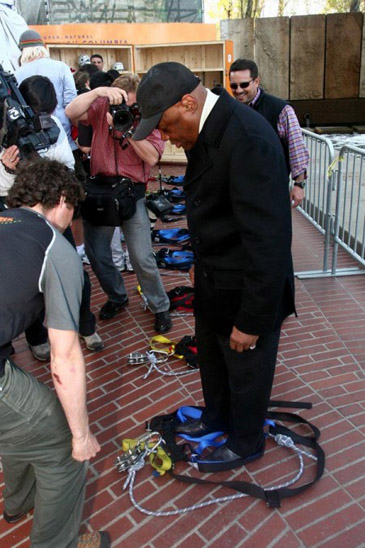 Eight major Muni lines are affected tonight after power lines went down at Mission and Front in downtown San Francisco. The following Muni lines were rerouted due to the downed lines: F-Market, 6-Parnassus,

Sunday Streets: Another daytime party in the streets takes place this Sunday along Great Highway and through Golden Gate Park. Take part in some bicycling, roller-skating, roller soccer, Lindy Hop, and enjoy live