Yesterday's brief meeting of the kumbaya board was either incredibly efficient or just a lazy way to slouch towards next week's holiday recess, depending on how desperate you are to know whether those AT&T network boxes will one day replace newspaper racks as the most annoying inanimate thing on our city's sidewalks (progress!). In just under two hours, including a break, the board plowed through a deceptively large number of agenda items. Sadly, no one threw any chairs.

Items 1-30, the boring memorandums of understanding and lawsuit settlements, were knocked out in one fell swoop, letting us jump right to the big one: AT&T's lightspeed network upgrades. This was it! The moment of truth! Would Scott Wiener break Comcast's stranglehold on cable TV service in the city? Would graffiti artists have fresh metal canvasses all over town to creatively write their name on?

And the answer is: Nope! Or rather, we won't know until the 19th of July at the earliest. When the item came up Supervisor Wiener asked for another delay, calling himself "the king of AT&T continuance." Perfect! We didn't want to hear about that crap again anyway. And look, we made you a crown: 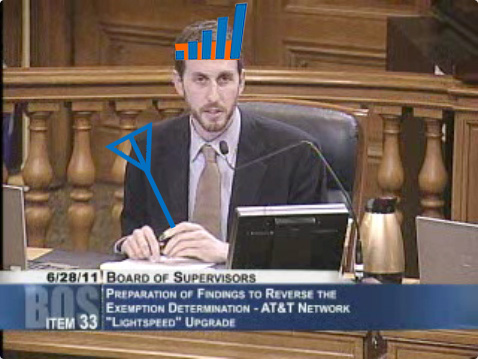 So we'll get another hearing on the issue - not about the AT&T boxes specifically, but about the "Surface Mounted Utility Order", which is a piece of the Better Streets Plan that sets guidelines for putting things (like big AT&T utility boxes) on the sidewalks (duh). Since budget talks were responsible for holding up Land Use committee meetings, we can't really lay the blame on Wiener for the delay. But while we're on the subject of more bars in more places we're liking where Wiener is going with this proposal to ease liquor license restrictions in the Mission, if only because we do enjoy getting sloshed while we bowl.

After last week's brutal beating, Ross Mirkarimi wanted to thank everyone for the "extraordinary discussion" about the Booker T. Washington Community Center on Presidio Ave. Ross has calmed down a bit since last week and he found some time to sit down with the folks at Booker T. who reassured him that the gym would remain available for community use as much as possible. Nobody gets bonus points for mea culpas though.

Supervisor Cohen kept her comments brief when introducing the plan for the Executive Park in the Bayview. Without any discussion the matter went to roll call vote. When Clerk Calvillo called on Cohen, she paused for effect before uttering a pleased and soothing "Aye", as if she were putting her little Executive Park Subarea Special Use District baby to sleep. It was delightful. +1 to Malia Cohen because we value her brevity, but we also love a touch of theatrics.

Rules Committee boss Jane Kim introduced her appointments to the Redistricting Task Force. Everyone seems cool with the appointments so far (Mike Alonso, Jenny Lam and Eric McDonnell), except they somehow forgot to nominate an LGBT candidate. Supervisor Wiener stuck up for Team LGBT though, he's been assured that Ed Lee will use his three appointments to nominate at least one member from that community - if not two.

Supervisor Farrell used his time during introductions to call for a hearing on Family Flight. We've acknowledged this is a bit of a problem around here, but the number of strollers spotted on recent walks through the Marina seem to indicate Mark Farrell's district isn't really the one at risk here. Working class hero John Avalos added his support for the hearing as well, so at least it won't be a total yogapants convention.

Kim used her introduction time to discuss recent incidents of violence in her district. Like the 43-year-old man who was "an unintended victim." Pardon the scare quotes there - that's just how Ms. Kim put it while making her best "yeeeeeesh" face: 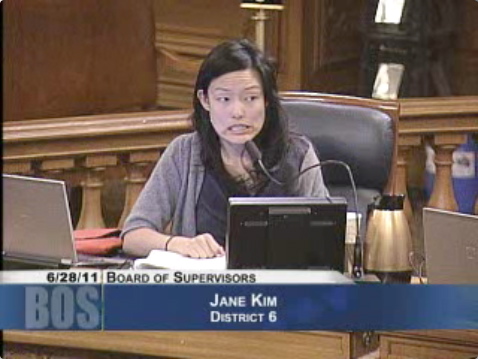 Anyway, her emergency community meeting on safety is going to lead to increased foot patrols in SoMa, but she also wanted to thank Captain Garrity's response to Saturday's Market Street shooting. Thanks to the Captain's efforts in the Tenderloin, "we've seen a lot of the activity get pushed out of the Tenderloin on to Market Street." Thanks?

Supervisor Wiener made a couple of Muni-related introductions: A piece of legislation that lets the Board keep an eye on implementation of the MTA-Transit Workers Union contract, and a follow-up hearing on the J-Church.

After the usual suspects at Public Comment and a brief recess, the remainder of the meeting was sucked down the gaping black maw of some North Beach neighbors who are still butthurt over the Joe DiMaggio playground and North Beach Library plan. They'll get no sympathy from us over that hideous brick prison of knowledge that sits on the site now, and comment of the week goes to this gentleman below who thanked the supes for "playing whack-a-mole" and squashing every piece of opposition that popped up: 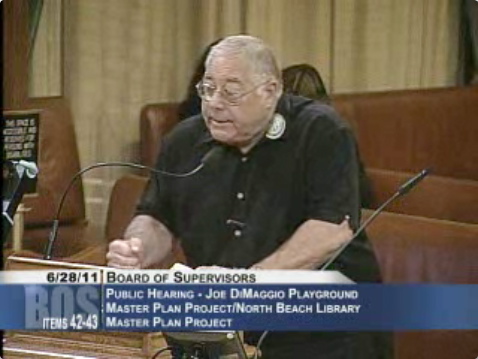 So at the end of the shortest meeting in recent memory, everyone seemed like they're just trying to get through their week — totally understandable given the long weekend on the horizon (and a month long recess in August), but we'd like to see a little more spark from everyone in the future. The delightfully productive Malia Cohen takes home this week's sole +1. Gentleman at the top: watch out for those ladies in the middle.

Cyclists have even more reason to relish perceived victimization today -- oh, we kid! -- after the SFMTA stripped plans for bike lanes on busy Cesar Chavez. What? Mission Local reports: "The cause

—
Board of Supervisors Weekly Power Rankings for Wednesday, June 29, 2011
Share this