Debate! Intrigue! Public Hearings! Jane Kim! Recess! Yesterday's Board of Supervisors meeting had just about everything one could want from a meeting that ran just a hair over five and a half hours. Predictably, the longest debate centered around the Booker T. Washington Community Center on the edge of Pac Heights and the Richmond, but before we could get to that, we had to sit through one of Supervisor Mirkarimi's long-winded speeches about the SFPD's Deferred Option Retirement Program.

Pet peeves with calling it the "DROP Program" aside, Mirkarimi argued that we should keep the program going because we haven't been able to effectively measure it and the city won't be graduating anybody from the Police Academy anytime soon so we need the incentive to hold on to our aging police force. Sounds fair enough, but we had to cringe a little when Ross spotted "a very senior member of the police department, right there" in the audience and asked to bring him up to speak: 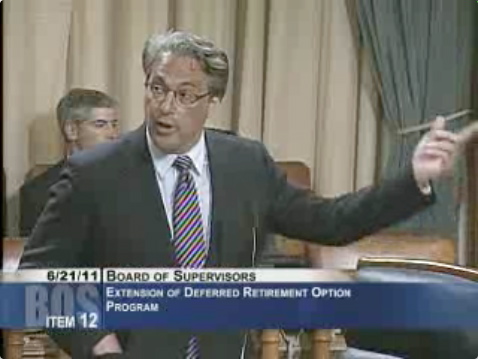 What a happy coincidence! Captain Casciato, a 40-year veteran of the force and former president of the Police Officers Association just [ahem] happened to be in the room observing yesterday. He seemed to be a decent (although obviously biased) source of information on the program and we don't doubt the captain's experience as one of San Francisco's finest, but Ross wasn't doing himself (or his campaign for Sheriff) any favors by buttering the guy up.

With a straight face, Ross told the captain that his forty years with the SFPD was, "a long period of time - you must have joined the force as a child." Which: What? You're not talking to your mother-in-law here. And if you were, she'd tell you to wipe that brown smudge off your nose. Making a play for the Police Officer's Association endorsement is one thing, but this was just a mess. -1 to Ross Mirkarimi for the farce that was his hollow DROP speech. And don't even get us started on the jumbled up buzzword soup that he floated before finally wrapping it up.

On the bright side, it gave Sean Elsbernd another chance to stand up and get angry, calling the motion, "SO irresponsible." +1 to Sean Elsbernd for hilarious gesticulations. 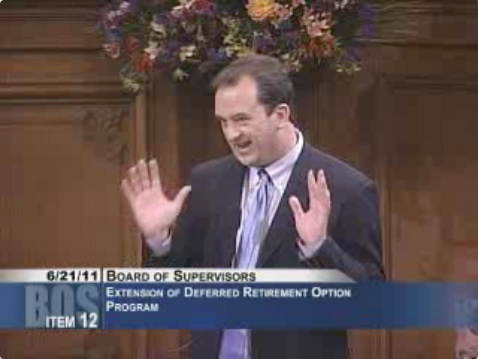 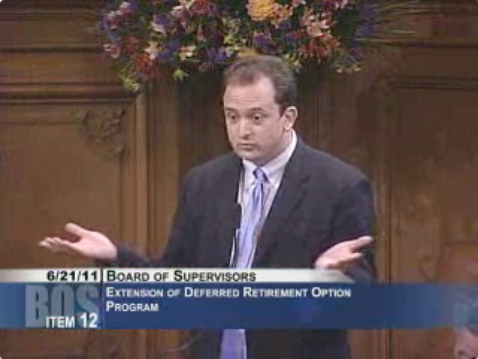 "With all due respect, Supervisor Mirkarimi, you just got Elsburned" [Paraphrasing]

After that mess, yesterday's meeting was probably not the best time for Supervisor Mirkarimi to throw in a recognition of two Sheriff's department employees. Again, it's a nice gesture! No one doubts that the two honorees deserve it, but when you're lead in is a defense of the forthcoming recognition ("we do this kind of thing all the time," basically) the sentiment falls flat. -1 to Supervisor Mirkarimi for the icky feeling.

During roll call for introductions, John Avalos recognized the great Barbara Schultheis for her contributions to the SFFD and fire codes in general (She's responsible for some of the codes that you read while you're bored on elevators). Her day of recognition is tomorrow, June 23rd, 2011. We're not going to award any points for that resolution, but we just want to point out that this was such a missed opportunity to read the lyrics to the Talking Heads' "Burning Down the House".

After President Chiu swept us through a long list of budget items, we had a brief recess before the Booker T. Washington Community Center item at 4 p.m. We tend to drink way too much coffee before these things (because of how they're boring), so that was nice.

Anyhow, the public hearing on the BTWCC went more or less like you might expect. Some neighbors continued to complain about their "all-Victorian neighborhood", but during discussion Supervisor Farrell addressed the Transitional-Aged Elephant in the room: Are these neighbors actually opposed to transitional-aged youth (the intended residents of the Booker T. center) moving in to the neighborhood?

Apparently the NIMBYs in this case aren't as caustic as one might think - the five neighborhood groups that originally opposed the project agreed not to appeal the project assuming the height was reduced to 45 feet as opposed to the planned 55. In his speech, Farrell called on the board to quit forcing affordable housing projects on their districts without input from the neighbors. As it turns out, a lot of San Franciscans aren't opposed to projects like this, they're just opposed to tall buildings. +1 to Supervisor Farrell for calling out the rest of the board's "just deal with it" affordable housing plan.

That should have been a mic-down, end-of-discussion moment, but everyone else chimed in with their two cents (and then some). Supervisor Wiener supported the project, but wanted to make sure everyone was clear that this wasn't about neighbors trying to keep a certain group of people out of their neighborhood. (Good point, but Farrell already made it.) Supervisor Campos also supported the project, but really didn't need to talk so long about his opposition to introducing legislation in another supervisor's district. Again: We already already covered that, let's just all agree to not do it in the future.

Finally, the beleaguered Supervisor Mirkarimi stood up (really?) to defend the cross-district legislation, but after a long day he probably should have just let that one go.

Jane Kim said she would have supported the project at 65 feet. Thanks for your input! Can we go home now? Edit: By popular demand here it is, your moment of Kim: At the end of the day, Ross took a beating but we have to give him a bonus +1 for telling the cabbies outside of city hall to move along. Mark Farrell gets the political win and his pal Sean Elsbernd wins for sheer comedy. Jane Kim gets no points for using special commendations time to wish her friend a happy birthday... a week late. We end the week with the St. Ignatius Brothers sitting pretty at the top of the rankings, but here's to hoping someone in the middle has the white guys in their sights.

After June's WWDC failed to deliver any special phone gadgetry, we're now hearing word that Apple will launch the iPhone 5 in September. Probably. The new phone will allegedly come equipped with a

—
Board of Supervisors Weekly Power Rankings for Wednesday, June 22, 2011
Share this