We often use this introductory space to suggest alternative uses for the weekly papers you've collected from the box out in front of the liquor store every Wednesday: Maybe you're moving and you need something to wrap the dishes in. Or perhaps you're training a rescue pit bull and need some extra material to lay down. With so many useful things to be done with these things, it's a wonder anyone bothers to read them at all, but we did anyway. Here's what we managed to make out from the pages before the pit bull shredded them all:

The Weekly's cover story today is Brokeback Festival - Joe Eskenazi's in-depth report on how the Pride Parade has been running itself in to the ground. Apparently the real theme of Pride is "[t]hrowing spectacular, well-attended events — and losing money prodigiously." That's a pretty cool way to party if you're rich, but it doesn't really work so well for non-profits. Our favorite first page sentence: " Pride has also experienced a leadership exodus befitting a Central American junta." Excellent work, Joe.

In Food Jonathan Kauffman is surprised to arrive to no long waits at Brenda's French Soul Food. Apparently Brenda's new dinner service isn't as popular as her brunch, which is odd because Kauffman says the new menu items were great. The holdovers from the breakfast and lunch menus though? Those have gone downhill, "as if they're sulking at the birth of an adorable baby sister." Anyway, moral of the story: if you're at Brenda's just order whatever's on the specials board.

In music Rae Alexander explains Why You Should Love Ke$ha, which: No. No one should ever like Ke$ha. She's the worst! But we'll probably read the article later anyway, just to figure out how we can hate her even more.

In case you thought "Brokeback Festival" was about movies and were suddenly disappointed, J. Hoberman reviews "Meek's Cutoff". The film played at the SF International Film Festival and it's a "fact-based", "suggestively allegorical, discreetly trippy Western". Sold! Where do we buy tickets?

The folks over at The Bay Guardian are recognizing small businesses this week because what is a weekly paper without a nice theme issue every week? Going outside the theme to acknowledge the death of Osama bin Laden, Tim Redmond's editorial explains why it won't mean much for Iraq and Afghanistan.

In Music: no-shoe, wavegaze, shithouse alt-buzz band Psychedelic Horseshit discuss how annoying it is when writers make up nonsensical genres. (Which their name is a reaction to.) Putting on an air of anti-pretentiousness is pretty pretentious itself, but it makes for a way better read than actual horseshit (talking about Ke$ha again).

In Film Jodie Foster discusses her beaver, or rather she discusses her film The Beaver which looks awful. Apparently, it was hard even for Jodie Foster to (ahem) "maintain her vision" while working on a movie in which Mel Gibson spews obscenities through a puppet.

Other Guardian pieces of interest: Canine Conflict about the fight over off-leash dogs in the GGNRA, another review of Meek's Cutoff and a very comprehensive list of the best places to get bottomless mimosa's. 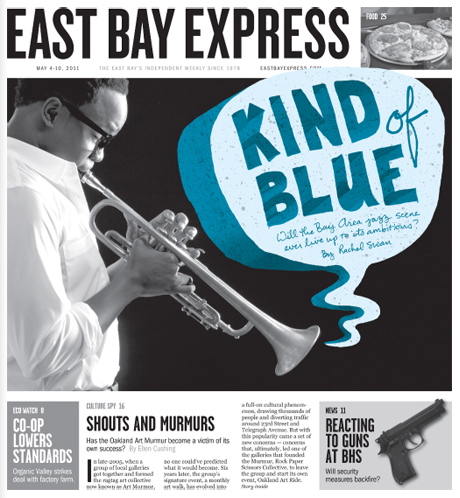 Finally, it's over to the East Bay where the Express asks the tough question: Will the Bay Area's jazz scene ever live up to its ambitions? Rachel Swan's cover story is a comprehensive overview of the current state of Bay Area jazz. Venues like the Fillmore edition of Yoshi's, Bruno's or Coda in the Mission and others have all either opened up their bookings to more profitable DJ and hip-hop shows or they've shuttered completely. It seems the Bay Area is only "abstractly interested in the idea of having a jazz scene." We like the idea of it, we just don't like watching it on a regular basis.

Elsewhere in the East Bay, there's backlash brewing all around: In Berkeley, students worry that locking down high school campuses after a couple incidents of students carrying guns to school could, erm, backfire. Organic Valley, a co-op that used to be a model for sustainable farms, lowers its standards to allow for factory-farmed eggs from chickens who live caged lives. Efforts to move two West Oakland recycling companies to the old Oakland Army base reveal that sometimes recycling isn't so green. And the political cartoon points out the irony in re-naming the Overstock.com coliseum.

We're getting word that a massive fire erupted at 1044 ans 1040 Folsom, near Seventh and Sixth Streets, early this evening. SFist co-editor Jay Barmann tells us that the fire is located in

Horrible Livermore residents against public transportation in their backyard. [CoCo Times] Jennifer Siebel's Miss Representation has the potential to inspire. [Appeal] Willie Brown is rich and powerful. [Inside Scoop] Psst, the Outer Sunset