Our interest in the Board of Supervisors weekly meetings has been waning ever-so-slightly every week since the class of 2011 took their place in the People's Chambers. So, in order to bring a little more excitement back in to our city's politics, here's our completely unbiased recap of last night's meeting, along with a scorecard and not-at-all-subjective Board of Supervisors Weekly Power Ranking:

"Mr. President, all members are present," spoke Board Clerk Angela Calvillo and thus began the most lively and spirited Board of Supervisors meeting we've had since... well, since the Donkey Kong thing. The first few items zipped through, mostly without any discussion necessary, but when we hit Item 12 things got interesting.

Tenderloin supervisor Jane Kim, again looking smart in square frames, spoke in support of her resolution to oppose state budget cuts that would eliminate Adult Daytime Health Care facilities. Meanwhile, Mark Farrell dissented on the basis that simply opposing cuts is a waste of time. (Sidenote: more mentions of dissent, please.) Instead of working to pass fluffy resolutions, Farrell suggested the board focuse their attention on ways to get the money back: BOOM! POW! Look out, because the Supervisor from Pac Heights just did a Farrell-roll. The resolution still passed, because the Board loves a good resolution, but still: +2 for Mark Farrell. And half a point to Jane Kim for those stylish frames. 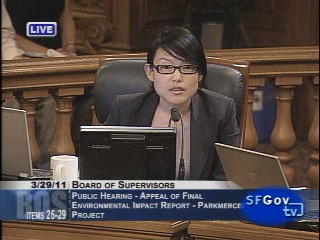 Probably sensing the special item on Parkmerced was going to be a total bitch to deal with, the Board sped through Items 13-20, including Ross Mirkarimi's unnecessary pitch for his Lower Fillmore/Western Addition re-zoning legislation. We say unnecessary because, duh, that thing passed just fine, but we'll refrain from deducting points because we also approve of Mirkarimi's comeback kids.

Moving on to Item 21, the next big item of the day, President Chiu again laid out the argument against unsolicited phone books. As we mentioned earlier this item was tabled for another six weeks: disappointing! Maybe if Chiu had entered the People's Chambers dressed like Hulk Hogan and ripped a phone book in half then people would get more excited about banning these things. We're all excited about it, obviously, but not THAT excited. We could be MORE excited, is what we're saying. Anyway, we'll award +1 to David Chiu for being more knowledgeable than the city economist about how advertising rates work (dude, that's your job!) and another +1 for slinging a zinger at Walter Paulson, the singing public commenter. So it's +2 for David Chiu.

During introductions, we got everything we expected and it all pertained to tax breaks, stock options and startups: Chiu laid out the plan he and Ed Lee put together to "convene an ad hoc council" to advise the city on tax structure. Seeking outside advice is a good idea, of course, but when Chiu mentioned his buzzphrase "a 21st Century Economy" for the second time in the meeting, he started to sound like a jingoist for his own Mayoral campaign. We tend to look down on blatant campaigning at Board meetings and the reminders of his buddy-buddy relationship with Temporary Mayor Ed Lee felt a little icky as well, but we'll leave the Board President with his 2 points for now because he had the audience in stitches when he worked in another zinger during the interviews on the Parkmerced special item.

Other twitter/tax/stocks-related introductions: Ross Mirkarimi's 2-year moratorium on the stock option tax might not be the best solution (and he offered some flexibility on the time period), but he had the best argument. He called the Twitter proposal "clumsy" and pointed out that 10th and Market isn't the only neighborhood that needs to be revitalized. So we'll award a +1 to Ross Mirkarimi for sticking up for the city as a whole instead of just the feel-good projects around the Tenderloin.

Farrell's similar push to eliminate the stock option tax was well thought out, but he never really matches the passion we get from the D5 Supervisor (too much time up in the Heights, maybe?) and anyway - dude isn't going to top his Jane Kim snub on item 12. 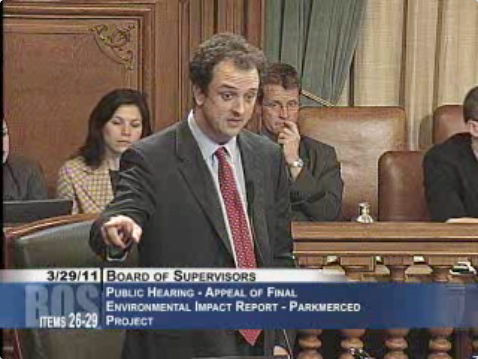 How about that Parkmerced item? That was quite a large item! Thankfully, the time we lost listening to the line of public commenters that went out the door of the chambers was all worth it when Sean Elsbernd got to stand up and deliver his Philadelphia speech. The D7 Outerlands supervisor was clearly fired up about transit, but he's under no impression that his district takes the top transit priority in the city with other projects like the Transbay Terminal and the Central Subway. "Let's be real," the Irish-Catholic supervisor told the board, "the West side is dramatically under-served when it comes to public transit. No one can debate that. [Note: we don't think anyone was?] The only way that changes is with significant development like this." When Campos and Avalos weren't sold on the project, Elsbored upgraded himself to an Elsburned by promptly schooling them on how we get state and federal funding for transit upgrades: "only with projects like this." +3 for Sean Elsbernd.

Eric Mar's complaints about the current parking situation around Parkmerced just seemed limp in comparison. Shouldn't you be riding your bike there anyway? And besides, this is a 30-year project, quit thinking about your short-term parking woes. Zero points for Eric Mar.

Malia Cohen spoke up a couple times during the proceedings for the Yellow Pages item, as well as the appeal on the Parkmerced environmental review. But both times she asked somewhat unclear questions about "the socio-economic impact" each item would have on the community. That's a nobel thing to show concern for: "socio-economics", but it would be so much more useful if the city economist or the member of the planning department being addressed actually had some idea what being asked of them. No points deducted for the freshman supe, who admitted more than once to being new, but some focus wouldn't hurt. Just a friendly tip.

We have very little criticism for the rest of the supes: Carmen Chu gets +half a point, for her nay vote on pointless resolutions. Avalos and Campos kind of putzed around but didn't do anything offensive to our tastes. And Scott Wiener, we're still big fans, (loved your work on the Muni and the cabs and stuff) but you're gonna need to look for a big project to get fired up about soon. Maybe expand on those J-church gripes and cover all of Muni.

At the end of the meeting, the Chiu-Chiu train is chugging along, getting the board president out of the red and back in black, but the newly christened Sean Elsburned wins the day.

This just in from the SFMTA by way of the ever-vigilante Muni watchdogs at Muni Diaries: Adult "A" Fast Pass prices will go up to $72 per month starting July 1. Likewise, the

As the Lower Haight Art Walk approaches (from 6pm to 9:30pm on Friday, folks), so does the annual tattoo roulette tradition at Idle Hand Tattoo Studio. See, each year they offer "$60

—
Board of Supervisors Weekly Power Rankings for Wednesday, March 30th
Share this