On Halloween night, the "Black Cat Cafe" -- that notorious, flamboyant and most historically significant of San Francisco's gay nightspots, held a final celebration before closing down for good.

Though Prohibition had shuttered the venerable North Beach establishment in the '20s, the Black Cat proudly reopened in 1933. Number 710 Montgomery Street quickly became a magnet for artists, writers, and beatniks. Steinbeck, Saroyan, and Ginsberg all patronized the joint, and in fact, the Black Cat played the role of the "Bohemian Bar" in Kerouac's novel On the Road. 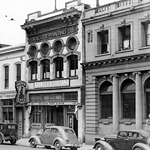 Following World War II, a new military policy precipitated the sudden discharge of thousands of gay men into the welcoming arms of our liberal city. The Black Cat became a central gathering place, evolving into a kind of bohemian drag bar, but much more than that; a place where poets, sailors, stevedores and suits could shake off convention, creating a wild sense of revolutionary freedom for gay and straight folks alike.

After a gaggle of youths jumped the turnstiles at the Richmond, Fruitvale and Coliseum stations, BART decided to close down the three stations. Yikes. According to the Gate, around 60 people jumped the

We got the District One poll up, and the Richmond is letting us know who they want as their supreme leader. (Sue Lee is currently in the lead, with Eric Mar going for