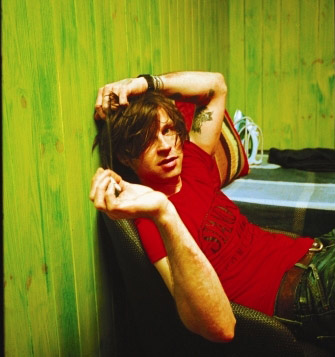 How 'bout them Cardinals? Ryan Adams was in town this week, and he evidently brought two very different moods to the San Francisco and Berkeley shows. We were at the Herbst Theatre show and were completely loving the setup: 8pm show time, gorgeous theater, front row seats on the second level for perfect sound quality. Ryan and his magnificent band The Cardinals were set up for an acoustic show, with all six members lined up across the stage in an arc and Ryan tucked in modestly on the left side. Ryan sang beautifully, sometimes playing acoustic guitar and sometimes not, and The Cardinals backed him up on piano, acoustic guitar, acoustic bass, steel guitar and a tastefully modest set of drums. Together they made music that was bigger than just the six of them; we especially enjoyed their vocal harmonies when two, three or four band members joined Ryan to make choir-sized sounds.

The set lasted two hours, with a brief intermission in between, and musically it's among one of the best shows we've seen this year. The only disappointment was the fact that Ryan hardly spoke five words to the crowd the entire evening. At one point toward the end an optimistic woman in the audience yelled out, "Ryan, what did you do in San Francisco today?" and was met with dead silence. Awkward! It was a little off-putting and created tension in an otherwise terrific show. In contrast, the Berkeley show was electric and this account of it paints Ryan out to be talkative and gregarious. Well, at least they're not phoning in the same routine every night.

Click below for show recommendations, music videos and big love for Hall & Oates.

For $25 a pop, you can attend iPhone-only iDating marketing schemes parties. "The iPhone makes speed dating more user-friendly, because you're rejecting a photo, not a real person," says iDating party thrower Niko

Last Sunday, San had walked a mile from her home in East San Jose at 6 a.m. to catch the bus to her job as a janitor at a doughnut shop in

—
When The Lights Go Down In The City
Share this