Hey, Folks, welcome to part two of our APE coverage. The Alternative Press Expo was this past weekend, and there was so much fun stuff we had to break our coverage into several tasty morsels. If you missed part one and want to read about some folks making with the funny, please feel free. In this post, we're focusing on some creators that combine a less obvious type of humor with some great art and a generally longer form of storytelling than the one-panel and gag-type creators. 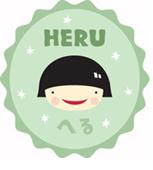 Toshiko Kamiyama had a few mini-comics at her booth. She suggested we try Heru. It's about the cutest thing we've ever seen -- a little autobiographical tale about her unfortunate hairdo as a child growing up in Japan. The 'do', as described by one of her cruel classmates, looked like a "German Nazi Helmet," which eventually turned into her nickname: "Heru"-- short for "helmet" in Japanese. (Though some relief was expressed at the "Nazi" aspect of the jibe being phased out). You can pick up a copy of your own at Super 7 in Japan Town or Doublepunch in North Beach. It's charming and a very satisfying read that you can share with just about anyone. 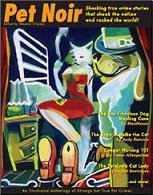 We reconnected with old friend Shannon O'Leary of Pet Noir fame. In addition to the beautiful, glossy, bound copies of that anthology, she had a dialogue-free mini-comic that's a bit of a precursor to her upcoming project Crimes Against Shannon (hah!). She described it to us as her personal story of a year in which she was on the victim-end of several (thankfully not life-threatening) unfortunate events.

Shannon introduced us to her table-mates, Melanie Lewis (who we talked about in part one) and Damien Jay, a recent transplant to Berkeley from New York City. We asked him if the independent comic climate in the Big Apple was comparable to the one out here -- he plainly told us that there were similar challenges, namely paying rent. However, with all the publishing in NYC, there were more opportunities to land freelance stuff. He gave us a look at some of his projects, in particular a book with a highly unusual genesis--the cover is the one pictured below ("Leslie Overnight", after the jump), but his Web site calls it "Opolis," and describes it as "A comic made out of photographs of a 3-D comics-infused building that was part of a show at Flux Factory in Queens, NY." Very strange, very cool, and way above our head. We appreciate Mr. Jay's patience in chatting with us, though.

l to r: Shannon O'Leary, Damien Jay, Josh Frankel with his son, Link (14 mos.), Deb Aoki (who we talked about in part one); Toshiko Kamiyama

This now-famous Pied-billed grebe gently nuzzles her hours-old baby while sitting atop her floating nest in San Francisco. At this point, she had four hatchlings camping out on her back (hiding under her

The bill calls for the DMV to set up a special toll-free number and/or e-mail address for people to report carpool crooks. And hey, that way people who see them will have